All Souls: A Family Story from Southie 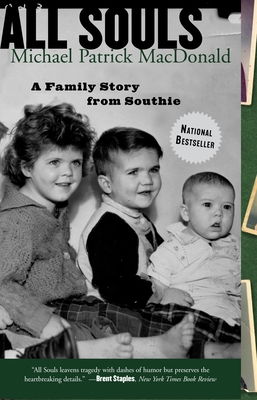 All Souls: A Family Story from Southie

By  Michael Patrick MacDonald
Paperback
$ 16.95
Likely On Our Shelves

“All Souls is the written equivalent of an Irish wake, where revelers dance and sing the dead person’s praises. In that same style, the book leavens tragedy with dashes of humor but preserves the heartbreaking details.”—Brent Staples, New York Times Book Review

A breakaway bestseller since its first printing, All Souls takes us deep into Michael Patrick MacDonald’s Southie, the proudly insular neighborhood with the highest concentration of white poverty in America.

Rocked by Whitey Bulger’s crime schemes and busing riots, MacDonald’s Southie is populated by sharply hewn characters. We meet Ma, Michael’s mini-skirted, accordian-playing, single mother who endures the deaths of four of her eleven children. And there are Michael’s older siblings Davey, sweet artist-dreamer; Kevin, child genius of scam; and Frankie, Golden Gloves boxer and neighborhood hero whose lives are high-wire acts played out in a world of poverty and pride.

Nearly suffocated by his grief and his community’s code of silence, MacDonald tells his family story here with gritty but moving honesty. All Souls is heartbreaking testimony to lives lost too early, and the story of how a place so filled with pain could still be “the best place in the world.”

MacDonald won the American Book Award in 2000 and has written numerous essays for the Boston Globe Op-Ed Page. His national bestseller, All Souls, and his follow-up, Easter Rising: A Memoir of Roots and Rebellion have been adopted by university curriculums across the country.