Invisible No More: Police Violence Against Black Women and Women of Color 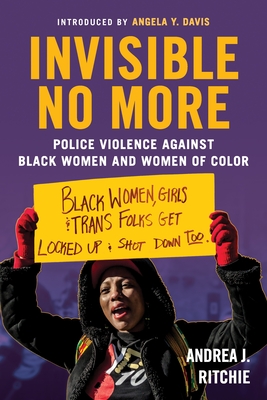 Invisible No More: Police Violence Against Black Women and Women of Color

“A passionate, incisive critique of the many ways in which women and girls of color are systematically erased or marginalized in discussions of police violence.” —Michelle Alexander, author of The New Jim Crow

Invisible No More is a timely examination of how Black women, Indigenous women, and women of color experience racial profiling, police brutality, and immigration enforcement. By placing the individual stories of Sandra Bland, Rekia Boyd, Dajerria Becton, Monica Jones, and Mya Hall in the broader context of the twin epidemics of police violence and mass incarceration, Andrea Ritchie documents the evolution of movements centered around women’s experiences of policing. Featuring a powerful forward by activist Angela Davis, Invisible No More is an essential exposé on police violence against WOC that demands a radical rethinking of our visions of safety—and the means we devote to achieving it.

Andrea J. Ritchie is a Black lesbian immigrant and police-misconduct attorney, and a 2014 Senior Soros Justice Fellow, with more than two decades of experience advocating against police violence and the criminalization of women and LGBTQ people of color. She is currently Researcher-in-Residence on Race, Gender, Sexuality, and Criminalization at the Barnard Center for Research on Women and the coauthor of Say Her Name: Resisting Police Brutality Against Black Women (AAPF, 2015) and Queer (In)Justice: The Criminalization of LGBT People in the United States (Beacon, 2011). She lives in Brooklyn, New York, and Chicago.