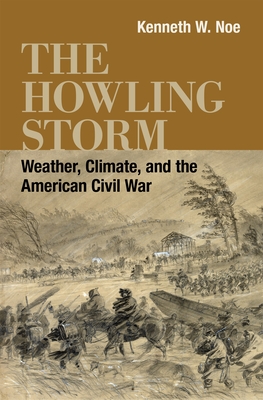 Finalist for the Lincoln Prize

Traditional histories of the Civil War describe the conflict as a war between North and South. Kenneth W. Noe suggests it should instead be understood as a war between the North, the South, and the weather. In The Howling Storm, Noe retells the history of the conflagration with a focus on the ways in which weather and climate shaped the outcomes of battles and campaigns. He further contends that events such as floods and droughts affecting the Confederate home front constricted soldiers' food supply, lowered morale, and undercut the government's efforts to boost nationalist sentiment. By contrast, the superior equipment and open supply lines enjoyed by Union soldiers enabled them to cope successfully with the South's extreme conditions and, ultimately, secure victory in 1865. Climate conditions during the war proved unusual, as irregular phenomena such as El Ni o, La Ni a, and similar oscillations in the Atlantic Ocean disrupted weather patterns across southern states. Taking into account these meteorological events, Noe rethinks conventional explanations of battlefield victories and losses, compelling historians to reconsider long-held conclusions about the war. Unlike past studies that fault inflation, taxation, and logistical problems for the Confederate defeat, his work considers how soldiers and civilians dealt with floods and droughts that beset areas of the South in 1862, 1863, and 1864. In doing so, he addresses the foundational causes that forced Richmond to make difficult and sometimes disastrous decisions when prioritizing the feeding of the home front or the front lines. The Howling Storm stands as the first comprehensive examination of weather and climate during the Civil War. Its approach, coverage, and conclusions are certain to reshape the field of Civil War studies.

Kenneth W. Noe is the Draughon Professor of Southern History at Auburn University. He is the author or editor of seven books on the American Civil War.