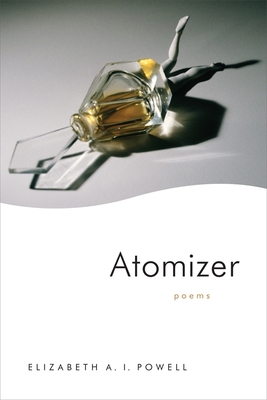 In Atomizer, Elizabeth A. I. Powell examines pressing questions of today, from equality and political unrest to the diminishing of democratic ideals, asking if it is even appropriate to write about love in a time seemingly hurtling toward authoritarianism. With honesty and humor, her poems explore fragrance and perfumery as a means of biological and religious seduction. Evoking Whitman's sentiment that we are all made of the same atoms, Atomizer looks toward an underestimated sense--scent--as a way to decipher the liminal spaces around us. Molecules of perfume create an invisible reality where narratives can unfold and interact, pathways through which Powell addresses issues of materialism, body image, and the physical and psychological contours of emotional relationships.

A work of fearless social satire and humorous yet painful truth, Atomizer offers a cultural, political, and sociological account of love in the present moment.

Elizabeth A. I. Powell is the author of The Republic of Self, winner of the New Issues Poetry Prize; and Willy Loman's Reckless Daughter, named one of the "Books We Loved in 2016" by the New Yorker. Her work has appeared in the Pushcart Prize Anthology and literary journals such as Barrow Street, Electric Literature, the Missouri Review, and Ploughshares. She is professor of writing and literature at Northern Vermont University-Johnson and editor of Green Mountains Review.