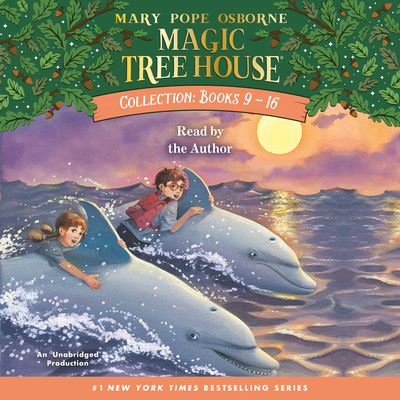 These eight titles are the perfect gift for a Magic Tree House fan or any child who loves a good adventure. Parents, teachers, and librarians hail the chapter-book series as a tool to promote reading, as even the most reluctant readers want to know where the Magic Tree House will take the brother-and-sister team next.

In books 9–12, Morgan le Fay, the magical librarian of Camelot, challenges Jack and Annie to find the answers to four riddles. To do so, they must travel under the sea and to the Wild West, the African plains, and the frozen Arctic. It’s a difficult and dangerous task, but if Jack and Annie succeed, they will become Master Librarians! In books 13–16, Jack and Annie must save stories that have been lost in history. Morgan, the magical librarian of Camelot, sends them to find the books in the ancient worlds of Roman Pompeii, imperial China, Dark Age Ireland, and classical Greece. Will Jack and Annie be able to save the stories in their darkest hours . . . or will the books be lost forever?

"Osborne's narration is low-key and well-paced. A great way to introduce children who are reluctant readers or can't yet read to this highly entertaining book series and to reading in general."--Chicago Parent

Mary Pope Osborne is the award-winning author of over forty books for young people, including American Tall Tales, the Spider Kane mystery books, and One World, Many Religions, an Orbis Pictus honor book. She served two terms as president of the Author's Guild, the leading writers' organization in the United States.