What Saves Us: Poems of Empathy and Outrage in the Age of Trump 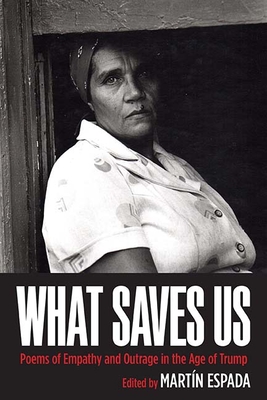 What Saves Us: Poems of Empathy and Outrage in the Age of Trump

This is an anthology of poems in the Age of Trump—and much more than Trump. These are poems that either embody or express a sense of empathy or outrage, both prior to and following his election, since it is empathy the president lacks and outrage he provokes.

There is an extraordinary diversity of voices here. The ninety-three poets featured include Elizabeth Alexander, Julia Alvarez, Richard Blanco, Carolyn Forché, Aracelis Girmay, Donald Hall, Juan Felipe Herrera, Yusef Komunyakaa, Naomi Shihab Nye, Marge Piercy, Robert Pinsky, Danez Smith, Patricia Smith, Brian Turner, Ocean Vuong, Bruce Weigl, and Eleanor Wilner. They speak of persecuted and scapegoated immigrants. They bear witness to violence: police brutality against African Americans, mass shootings in a school or synagogue, the rage inflicted on women everywhere. They testify to poverty: the waitress surviving on leftovers at the restaurant, the battles of a teacher in a shelter for homeless mothers, the emergency-room doctor listening to the heartbeats of his patients. There are voices of labor, in the factory and the fields. There are prophetic voices, imploring us to imagine the world we will leave behind in ruins lest we speak and act.

However, this is not merely a collection of grievances. The poets build bridges. One poet steps up to translate in Arabic at the airport; another walks through the city and sees her immigrant past in the immigrant present; another declaims a musical manifesto after the hurricane that devastated his island; another evokes a demonstration in the street, shouting in an ecstasy of defiance. The poets take back the language, resisting the demagogic corruption of words themselves. They assert our common humanity in the face of dehumanization.

MARTÍN ESPADA has published almost twenty books as a poet, editor, essayist, and translator. His latest collection of poems is called Vivas to Those Who Have Failed. He is the recipient of the 2018 Ruth Lilly Prize, and the editor of the groundbreaking anthology Poetry Like Bread: Poets of the Political Imagination from Curbstone Press.