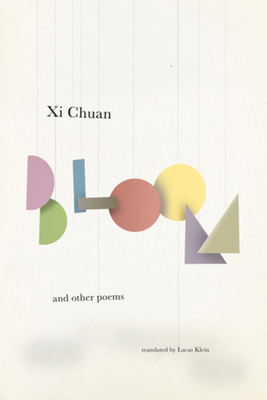 A rhapsodic meditation on the dreams and defeats, disparities and excesses, mythologies and absurdities of contemporary life

"Bloom and change your way of living," Xi Chuan exhorts us. "Bloom / unleash a deep underground spring with your rhizome." In his wildly roving new collection, Bloom & Other Poems, Xi Chuan, like a modern-day master of the fu-rhapsody, delves into the incongruities of daily existence, its contradictions and echoes of ancient history, with sensuous exaltations and humorous observations. Problems of mourning and reading, thoughts on loquaciousness, Manhattan, the Luxor Temple, and socks are scrutinized, while in other poems we encounter dead friends on a visit to a small village and fakes in an antique market. At one moment we follow the river's flow through the history of Nanjing, in another we follow an exquisite meditation on the golden. Brimming with lyrical beauty and philosophical intensity, the collection ends with a transcript of a conversation between Xi Chuan and the journalist Xu Zhiyuan that earned seventy million views when broadcast online. Award-winning translator Lucas Klein demonstrates in this remarkable bilingual edition that Xi Chuan is one of the most electrifying international poets writing today.

XI CHUAN, born in Xuzhou, Jiangsu province in 1963 and raised in Beijing, is one of China’s most celebrated poets, essayists, and literary translators. Among the numerous prizes and honors he has received are the national Lu Xun Prize for Literature, the Cikada Prize for poetry in Sweden, and the Tokyo Poetry Prize in Japan. He is a professor at the International Writing Center at Beijing Normal University.

LUCAS KLEIN is a father, writer, and translator, and an associate professor of Chinese at Arizona State University. In addition to Xi Chuan he has translated contemporary Chinese poets Mang Ke and Duo Duo as well as medieval Chinese poet Li Shangyin.