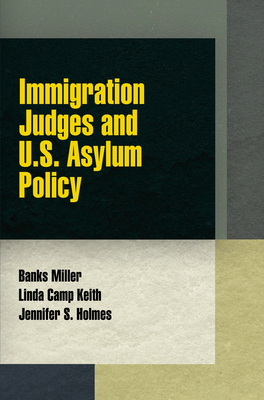 Although there are legal norms to secure the uniform treatment of asylum claims in the United States, anecdotal and empirical evidence suggest that strategic and economic interests also influence asylum outcomes. Previous research has demonstrated considerable variation in how immigration judges decide seemingly similar cases, which implies a host of legal concerns--not the least of which is whether judicial bias is more determinative of the decision to admit those fleeing persecution to the United States than is the merit of the claim. These disparities also raise important policy considerations about how to fix what many perceive to be a broken adjudication system.

With theoretical sophistication and empirical rigor, Immigration Judges and U.S. Asylum Policy investigates more than 500,000 asylum cases that were decided by U.S. immigration judges between 1990 and 2010. The authors find that judges treat certain facts about an asylum applicant more objectively than others: facts determined to be legally relevant tend to be treated similarly by judges of different political ideologies, while facts considered extralegal are treated subjectively. Furthermore, the authors examine how local economic and political conditions as well as congressional reforms have affected outcomes in asylum cases, concluding with a series of policy recommendations aimed at improving the quality of immigration law decision making rather than trying to reduce disparities between decision makers.