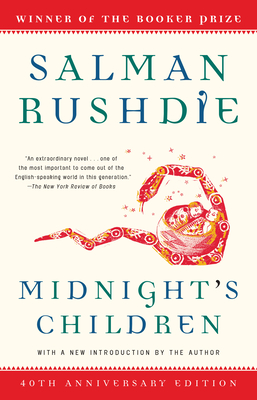 By  Salman Rushdie
Paperback
$ 18.00
Likely On Our Shelves

The iconic masterpiece of India that introduced the world to “a glittering novelist—one with startling imaginative and intellectual resources, a master of perpetual storytelling” (The New Yorker)

Selected by the Modern Library as one of the 100 best novels of all time • The fortieth anniversary edition, featuring a new introduction by the author

Saleem Sinai is born at the stroke of midnight on August 15, 1947, the very moment of India’s independence. Greeted by fireworks displays, cheering crowds, and Prime Minister Nehru himself, Saleem grows up to learn the ominous consequences of this coincidence. His every act is mirrored and magnified in events that sway the course of national affairs; his health and well-being are inextricably bound to those of his nation; his life is inseparable, at times indistinguishable, from the history of his country. Perhaps most remarkable are the telepathic powers linking him with India’s 1,000 other “midnight’s children,” all born in that initial hour and endowed with magical gifts.

This novel is at once a fascinating family saga and an astonishing evocation of a vast land and its people–a brilliant incarnation of the universal human comedy. Forty years after its publication, Midnight’s Children stands apart as both an epochal work of fiction and a brilliant performance by one of the great literary voices of our time.

Salman Rushdie is the author of fourteen previous novels, including Midnight’s Children (for which he won the Booker Prize and the Best of the Booker), Shame, The Satanic Verses, The Moor’s Last Sigh, and Quichotte, all of which have been shortlisted for the Booker Prize; a collection of stories, East, West; a memoir, Joseph Anton; a work of reportage, The Jaguar Smile; and three collections of essays, most recently Languages of Truth. His many awards include the Whitbread Prize for Best Novel, which he won twice; the PEN/Allen Foundation Literary Service Award; the National Arts Award; the French Prix du Meilleur Livre Étranger; the European Union’s Aristeion Prize for Literature; the Budapest Grand Prize for Literature; and the Italian Premio Grinzane Cavour. He is a member of the American Academy of Arts and Letters and a fellow of the American Academy of Arts and Sciences, and he is a Distinguished Writer in Residence at New York University. He is a former president of PEN America. His books have been translated into over forty languages.