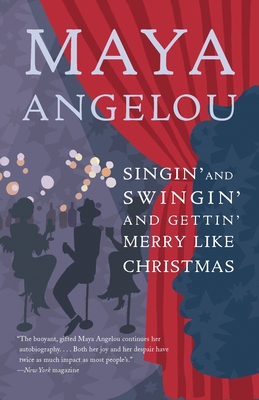 In this third self-contained volume of her autobiography, which began with I Know Why the Caged Bird Sings, Maya Angelou moves into the adult world. Maya struggles to support herself and her son through a series of odd jobs and weathers a failed marriage to a white man before landing a gig singing in one of the most popular nightclubs on the San Francisco coast. From there, she is called to New York to join the cast of Porgy and Bess. Maya soon finds herself on a joyous and dramatic adventure, touring abroad through Italy, France, Greece, Yugoslavia, and Egypt with spirited cast members, and performing for large, enthusiastic audiences. The exciting experience is dampened only by Maya’s nagging guilt that she has abandoned the person she loves most in life, her son, whose reentrance into her world reveals to Maya the healing power of devotion and love.

Charged with Maya Angelou’s remarkable sense of life and love, Singin’ and Swingin’ and Gettin’ Merry Like Christmas is a unique celebration of the human condition–and an enthralling saga that has touched, inspired, and empowered readers worldwide.

Maya Angelou was raised in Stamps, Arkansas. In addition to her bestselling autobiographies, including I Know Why the Caged Bird Sings and The Heart of a Woman, she wrote numerous volumes of poetry, among them Phenomenal Woman, And Still I Rise, On the Pulse of Morning, and Mother. Maya Angelou died in 2014.