The Only Game in Town: Central Banks, Instability, and Recovering from Another Collapse 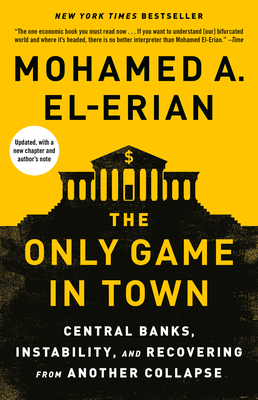 The Only Game in Town: Central Banks, Instability, and Recovering from Another Collapse

NEW YORK TIMES BESTSELLER • A roadmap to what lies ahead and the decisions we must make now to stave off the next global economic and financial crisis, from one of the world’s most influential economic thinkers and the author of When Markets Collide • Updated, with a new chapter and author’s note

“The one economic book you must read now . . . If you want to understand [our] bifurcated world and where it’s headed, there is no better interpreter than Mohamed El-Erian.”—Time

Our current economic path is coming to an end. The signposts are all around us: sluggish growth, rising inequality, stubbornly high pockets of unemployment, and jittery financial markets, to name a few. Soon we will reach a fork in the road: One path leads to renewed growth, prosperity, and financial stability, the other to recession and market disorder.

In The Only Game in Town, El-Erian casts his gaze toward the future of the global economy and markets, outlining the choices we face both individually and collectively in an era of economic uncertainty and financial insecurity. Beginning with their response to the 2008 global crisis, El-Erian explains how and why our central banks became the critical policy actors—and, most important, why they cannot continue is this role alone. They saved the financial system from collapse in 2008 and a multiyear economic depression, but lack the tools to enable a return to high inclusive growth and durable financial stability. The time has come for a policy handoff, from a prolonged period of monetary policy experimentation to a strategy that better targets what ails economies and distorts the financial sector—before we stumble into another crisis.

The future, critically, is not predestined. It is up to us to decide where we will go from here as households, investors, companies, and governments. Using a mix of insights from economics, finance, and behavioral science, this book gives us the tools we need to properly understand this turning point, prepare for it, and come out of it stronger. A comprehensive, controversial look at the realities of our global economy and markets, The Only Game in Town is required reading for investors, policymakers, and anyone interested in the future.

Mohamed A. El-Erian is the chair of President Obama’s Global Development Council and chief economic advisor at Allianz, the corporate parent of PIMCO where he was previously the CEO and co-CIO. He is a contributing editor at the Financial Times and a Bloomberg columnist. Earlier in his career, he served as Deputy Director at the International Monetary Fund, Managing Director at Salomon Smith Barney, and president and CEO of the Harvard Management Company. El-Erian was on Foreign Policy’s list of Top 100 Global Thinkers for four consecutive years, and named by that journal as one of the 500 most powerful people on the planet. He is regularly on CNN, CNBC, and Bloomberg, and his writings have also appeared in Fortune, The Wall Street Journal, The Washington Post, Business Insider, Newsweek, The Atlantic, Latin Finance, Project Syndicate, and other outlets. El-Erian’s last book, When Markets Collide, was a New York Times and Wall Street Journal bestseller, won the Financial Times/Goldman Sachs Award for best business book of the year, was named as a best book of the year by The Economist, and was called a best business book of all time by The Independent. El-Erian earned his master’s degree and doctorate at Oxford University, having obtained his undergraduate degree at the University of Cambridge, where he holds an honorary fellowship at Queens’ College.