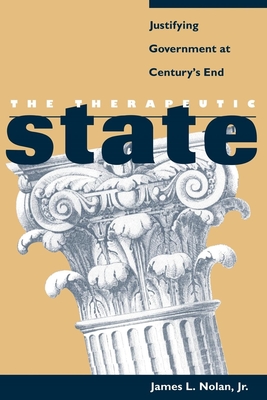 The United States has always been profoundly conflicted about the role and utility of its government. Simmering just beneath the surface of heated public discussions over the appropriate scope and size of government are foundational questions about the very purpose of the state, and the basis of its authority. America's changing and diversifying cultural climate makes common agreement about the government's raison d' tre all the more difficult.

In The Therapeutic State, James Nolan shows us how these unresolved dilemmas have coalesced at century's end. Today the American state, faced with a steady decline in public confidence, has embraced a therapeutic code of moral understanding to legitimize its very existence.

By ranging widely across education, criminal justice, welfare, political rhetoric, and civil law, Nolan convincingly illustrates how the state increasingly turns to the therapeutic ethos as a justification for its programs and policies, a development that will profoundly influence the relationship between government and citizenry. In a tone refreshingly free of polemic, Nolan charts the dialectic relationship between culture and politics and, against the backdrop of striking historical contrasts, gives example after example of the emergence of therapeutic sensibilities in the processes of the American state.