St. Lawrence Seaway and Power Project: An Oral History of the Greatest Construction Show on Earth 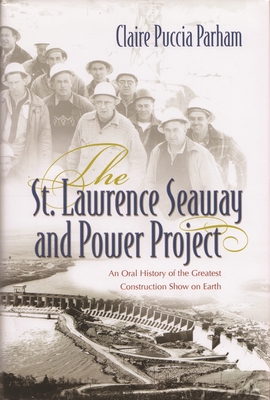 St. Lawrence Seaway and Power Project: An Oral History of the Greatest Construction Show on Earth

By  Claire Puccia Parham
Hardcover
$ 34.95
Out of Stock In Store (Available to Order)

The culmination of a century-long dream to link the Great Lakes interior industrial hubs to the Atlantic Ocean, the St. Lawrence Seaway and Power Project stands as one of the largest and most important public works initiatives of the twentieth century. Seen as vital to North American commerce and strategic in advancing America's position on the world stage, the billion-dollar seaway and power dam were also a phenomenal feat of engineering, involving an unprecedented level of cooperation between Canadian and American agencies and the unrelenting efforts of workers on both sides of the border. Dubbed the greatest construction show on earth, the largest waterway and hydro dam project ever jointly built by two nations consisted of seven locks, the widening of various canals, the taming of rapids, and the erection of the 3,216-foot-long, 195.5-foot-high Robert Moses-Robert H. Saunders Power Dam.

In this book, Claire Puccia Parham reveals the human side of the project in the words of its engineers, laborers, and carpenters. Drawing on firsthand accounts, she provides a vivid portrait of the lives of the men who built the seaway and the women who accompanied them. This book is a fitting tribute to the hard work and dedication of the project's 22,000 workers.

Claire Puccia Parham is an instructor in the History Department at Siena College in Loudonville, New York. She is the author of From Great Wilderness to Seaway Towns: A Comparative History of Cornwall, Ontario, and Massena, New York, 1784-2001.