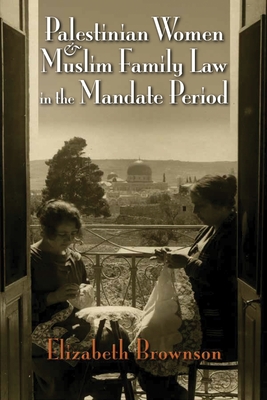 By  Elizabeth Brownson
Hardcover
$ 60.00
Out of Stock In Store (Click to Order)

In this volume, Brownson sheds new light on Palestinian Muslim women's agency in shari'a courts from the British Mandate period to the present. Her extensive archival research on wife-initiated maintenance claims, divorce, and child custody cases deepens our understanding of women's position in the courts, demonstrating that Muslim women were and are active participants in their legal affairs. Using court registers and interviews, Brownson uncovers a variety of ways women have manipulated the system to their benefit despite its patriarchal bias. She also finds that few reforms were implemented during the Mandate period. The British were uninterested in improving colonized women's legal status and sought to avoid further antagonizing Palestinians. At the same time, Palestinians wished to uphold the one indigenous institution they still controlled while both British rule and Zionism threatened their nationalist aspirations.

Although Palestinian women have had few alternatives to using this male privileged system to redress grievances with their husbands and in-laws, they continue to resist its injustices every day. Brownson finds that women's understanding of family law fundamentals has enabled some to deftly navigate the system; however, a unified, reformed law reflecting society's current needs is required so women can have full access to their rights.

Elizabeth Brownson is associate professor of history at the University of Wisconsin-Parkside.