Tequila: A Natural and Cultural History 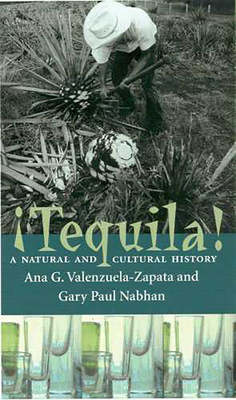 Tequila: A Natural and Cultural History

The array of bottles is impressive, their contents finely tuned to varied tastes. But they all share the same roots in Mesoamerica's natural bounty and human culture.

The drink is tequila—more properly, mescal de tequila, the first mescal to be codified and recognized by its geographic origin and the only one known internationally by that name. In ¡Tequila! A Natural and Cultural History, Ana G. Valenzuela-Zapata, the leading agronomist in Mexico's tequila industry, and Gary Paul Nabhan, one of America's most respected ethnobotanists, plumb the myth of tequila as they introduce the natural history, economics, and cultural significance of the plants cultivated for its production.

Valenzuela-Zapata and Nabhan take you into the agave fields of Mexico to convey their passion for the century plant and its popular by-product. In the labor-intensive business of producing quality mescal, the cultivation of tequila azul is maintained through traditional techniques passed down over generations. They tell how jimadores seek out the mature agaves, strip the leaves, and remove the heavy heads from the field; then they reveal how the roasting and fermentation process brings out the flavors that cosmopolitan palates crave.

Today in Oaxaca it's not unusual to find small-scale mescal-makers vending their wares in the market plaza, while in Jalisco the scale of distillation facilities found near the town of Tequila would be unrecognizable to old José Cuervo. Valenzuela-Zapata and Nabhan trace tequila's progress from its modest beginnings to one of the world's favored spirits, tell how innovations from cross-cultural exchanges made fortunes for Cuervo and other distillers, and explain how the meteoric rise in tequila prices is due to an epidemic—one they predicted would occur—linked to the industry's cultivation of just one type of agave.

The tequila industry today markets more than four hundred distinct products through a variety of strategies that heighten the liquor's mystique, and this book will educate readers about the grades of tequila, from blanco to añejo, and marks of distinction for connoisseurs who pay up to two thousand dollars for a bottle. ¡Tequila! A Natural and Cultural History will feed anyone's passion for the gift of the blue agave as it heightens their appreciation for its rich heritage.

Ana Guadalupe Valenzuela-Zapata is recognized in Mexico and the United States as the foremost botanical and horticultural expert on agaves used in the tequila industry. A professor at the Universidad de Guadalajara, and one of the few women field scientists in a male-dominated industry, she is author of the Span­ish language book, El Agave Tequilero, and numerous scientific articles on the blue agave.

A MacArthur Fellow and recipient of a Lifetime Achievement Award from the Society for Conservation Biology, Gary Paul Nabhan is Director of the Center for Sustainable Environments at Northern Arizona University.