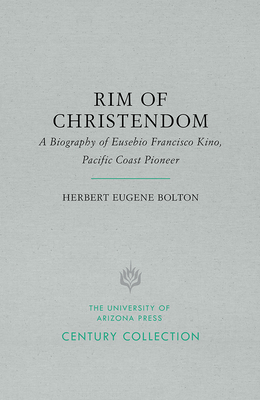 "This re-issued biography recounts [Kino's] work with loving detail and with an accuracy that has survived slight amendments. Its accompanying plates, maps, and bibliography enhance a text that should find a place in every serious library."—Religious Studies Review

"This is truly an epic work, an absolute standard for any Southwestern collection."—Book Talk

Select maps from the 1984 edition of Rim of Christendom are now available online through the UA Campus Repository.

Herbert Eugene Bolton (1870–1953) established the Spanish Borderlands as a significant area of research in North American history. In 1917 he published his seminal essay "The Mission as a Frontier Institution in the Spanish-American colonies." He was named head of the history department at the University of California, Berkeley, in 1919 and director of the Bancroft Library in 1920; he held both positions until 1940. Bolton was a pioneer in the use of Spanish and Mexican archives, where he studied the lives of his favorite subjects, Spanish missionaries and explorers of the Borderlands. Among his numerous publications are Fray Juan Crespi, Explorer on the Pacific Coast, 1769–1774, Outpost of Empire: The Story of the Founding of San Francisco, and Coronado, Knight of the Pueblo and Plains.