Business Without Boundary: The Story of General Mills 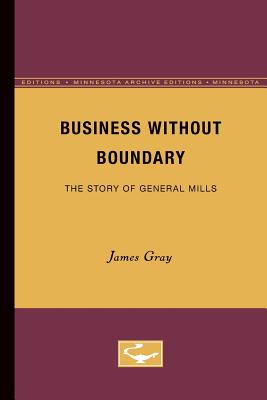 Business Without Boundary: The Story of General Mills

Business Without Boundary was first published in 1954. Minnesota Archive Editions uses digital technology to make long-unavailable books once again accessible, and are published unaltered from the original University of Minnesota Press editions.

The firm of General Mills is probably best known to millions of people as the maker of Gold Medal Flour and as the progenitor of that first lady of the kitchen and the airwaves, Betty Crocker. But, although its greatest fame is as a flour miller, the company engages in a host of other activities that attest to the foresight and creative thinking of its executives. In fact, the sky seems to be the only limit as the company extends its sights upward in Operation Skyhook, a United States navy research project for which General Mills makes and launches into the stratosphere giant plastic balloons.

James Gray relates not only the history of General Mills since its founding in 1928 but also the background of the major companies that merged to form the larger corporation: the Washburn Crosby Company of Minneapolis, the Sperry Company of San Francisco, the Kell group of Texas and Oklahoma mills, and the Larrowe Milling Company of Detroit.

Anyone interested in advertising and promotion will find fascinating the accounts of the early successes in radio advertising, including the first use of singing commercials and the phenomenal rise of Betty Crocker (voted the second best-known woman in America!) The scientific and technical research that is a cornerstone of the modern corporation is described in detail, as is the development of the products control method, a General Mills innovation now widely adopted in industry.

For those curious to understand how business expands, for those interested in a close-up of industrial leaders, for anyone who wants to sharpen his view of America at work, this is an important book.