Revolution as Reformation: Protestant Faith in the Age of Revolutions, 1688–1832 (Religion & American Culture) 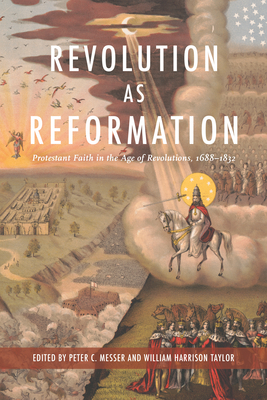 Revolution as Reformation: Protestant Faith in the Age of Revolutions, 1688–1832 (Religion & American Culture)

Revolution as Reformation: Protestant Faith in the Age of Revolutions, 1688–1832 highlights the role that Protestantism played in shaping both individual and collective responses to revolution. These essays explore the various ways that the Protestant tradition, rooted in a perpetual process of recalibration and reformulation, provided the lens through which Protestants experienced and understood social and political change in the Age of Revolutions. In particular, they call attention to how Protestants used those changes to continue or accelerate the Protestant imperative of refining their faith toward an improved vision of reformed religion.

The editors and contributors define faith broadly: they incorporate individuals as well as specific sects and denominations, and as much of “life experience” as possible, not just life within a given church. In this way, the volume reveals how believers combined the practical demands of secular society with their personal faith and how, in turn, their attempts to reform religion shaped secular society.

The wide-ranging essays highlight the exchange of Protestant thinkers, traditions, and ideas across the Atlantic during this period. These perspectives reveal similarities between revolutionary movements across and around the Atlantic. The essays also emphasize the foundational role that religion played in people’s attempts to make sense of their world, and the importance they placed on harmonizing their ideas about religion and politics. These efforts produced novel theories of government, encouraged both revolution and counterrevolution, and refined both personal and collective understandings of faith and its relationship to society.

Peter C. Messer is associate professor of history at Mississippi State University. He is the author of Stories of Independence: Identity, Ideology, and History in Eighteenth-Century America and coeditor, with William Harrison Taylor, of Faith and Slavery in the Presbyterian Diaspora.

William Harrison Taylor is associate professor of history at Alabama State University. He is author of Unity in Christ and Country: American Presbyterians in the Revolutionary Era, 1758–1801 and coeditor, with Peter C. Messer, of Faith and Slavery in the Presbyterian Diaspora.