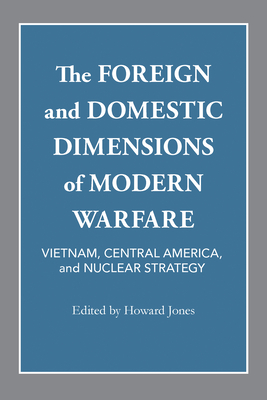 After the development of the atomic bomb in 1945, Americans became engaged in a "new kind of war" against totalitarianism. Enemies and objectives slipped out of focus, causing political and military aims to mesh as a struggle to contain communism both at home and abroad encompassed civilians as well as soldiers. In matters relating to Vietnam, Central America, and the nuclear arms race, the domestic and foreign dimensions of each issue became inseparable. Policymakers in Washington had to formulate strategies dictated by "limited war" in their search for peace.

Contributors to this volume demonstrate the multifaceted nature of modern warfare. Robert H. Ferrell establishes the importance of studying military history in understanding the post-World War II era. On Vietnam, Colonel Harry G. Summers, Jr., gives an intriguing argument regarding the U. S. Army; George C. Herring examines how America's decisions in 1954 assured deepened involvement; and Captain Mark Clodfelter uncovers new evidence concerning "Linebacker I." On the home front, Robert F. Burk analyzes the impact of the Cold War on the battle for racial justice; Charles DeBenedetti puts forth a challenging interpretation of the antiwar movement; and James C. Schneider provides perspective on the relationship between the Vietnam War and the Great Society. On Central America, two writers downplay communism in explaining the region's troubles. Ralph Lee Woodward, Jr., fits the Nicaraguan revolution in the long span of history, and Thomas M. Leonard shows how the Reagan administration forced Costa Rica to side with the United States's anti-Sandinista policy. Finally, on nuclear strategy, Donald M. Snow offers a thought-provoking assessment of the "star wars" program, and Daniel S. Papp recommends measures to promote understanding among the superpowers.

These essays demonstrate that the making of foreign policy is immensely complicated, not subject to easy solution or to simple explanation. Despite these complexities, the central objective of policymakers remained clear: to safeguard what was perceived as the national interest.

Howard Jones is a professor emeritus of history at The University of Alabama. He is the author of Blue and Gray Diplomacy: A History of Union and Confederate Foreign Relations and The Bay of Pigs.