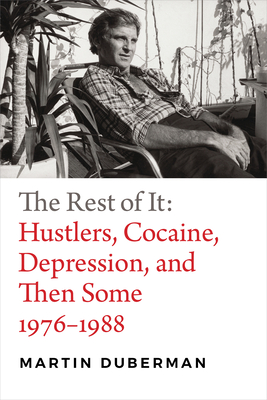 For many, the death of a parent marks a low point in their personal lives. For Martin Duberman--a major historian and a founding figure in the history of gay and lesbian studies--the death of his mother was just the beginning of what became a twelve-year period filled with despair, drug addiction, and debauchery. From his cocaine use, massive heart attack, and immersion into New York's gay hustler scene to experiencing near-suicidal depression and attending rehab, The Rest of It is the previously untold and revealing story of how Duberman managed to survive his turbulent personal life while still playing leading roles in the gay community and the academy.

Despite the hardships, Duberman managed to be incredibly productive: he wrote his biography of Paul Robeson, rededicated himself to teaching, wrote plays, and coedited the prize-winning Hidden from History. His exploration of new paths of scholarship culminated in his founding of the Center for Lesbian and Gay Studies, thereby inaugurating a new academic discipline. At the outset of the HIV/AIDS epidemic Duberman increased his political activism, and in these pages he also describes the tensions between the New Left and gay organizers, as well as the profound homophobia that created the conditions for queer radical activism. Filled with gossip, featuring cameo appearances by luminaries such as Gore Vidal, Norman Mailer, Vivian Gornick, Susan Brownmiller, Kate Millett, and N stor Almendros, among many others, and most importantly, written with an unflinching and fearless honesty, The Rest of It provides scathing insights into a troubling decade of both personal and political history. It is a stimulating look into a key period of Duberman's life, which until now had been too painful to share.

Martin Duberman is Distinguished Professor of History, Emeritus, at City University of New York, where he founded and directed the Center for Lesbian and Gay Studies. He is the author of numerous histories, biographies, memoirs, essays, plays, and novels, which include Cures: A Gay Man's Odyssey; Paul Robeson; Stonewall; Midlife Queer: Autobiography of a Decade, 1971-1981; Black Mountain: An Exploration in Community; The Worlds of Lincoln Kirstein; Jews/Queers/Germans; and more than a dozen others. His biography of Charles Francis Adams won the Bancroft Prize, and his coedited anthology Hidden from History: Reclaiming the Gay and Lesbian Past won two Lambda Literary Awards. He won a third Lambda Award for Hold Tight Gently: Michael Callen, Essex Hemphill, and the Battlefield of AIDS. Duberman received the 2007 Lifetime Achievement Award from the American Historical Association, as well as two honorary degrees: Doctor of Humane Letters from Amherst College, and Doctor of Letters from Columbia University. He was also a finalist for the Pulitzer Prize and the National Book Award. Duberman lives in New York City.