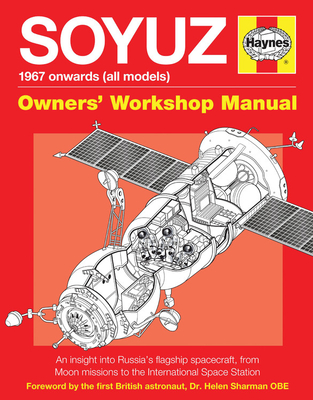 The Soyuz spacecraft played a major role in Russia's plans for a manned landing on the Moon and several test models were flown at the height of the 'space race'. Originally designed for circumlunar flight, Soyuz has been the mainstay of Russia's space program.

Dr. David Baker worked with NASA on the Gemini, Apollo and Shuttle programmes between 1965 and 1990. He has written more than 100 books on space flight, aviation and military technology. In October 2017 he received the American Astronautical Society's Frederick I. Ordway III award "for a sustained excellence in space coverage, through books, articles, as well as engagement in the early US space program." Dr. Baker is the author of the Haynes NASA Space Shuttle Manual, International Space Station Manual, NASA Mars Rovers Manual, Apollo 13 Manual, Soyuz Manual, Rocket Manual and Hubble Space Telescope Manual. David is currently the Editor of Spaceflight, the monthly space news magazine of the British Interplanetary Society, of which he is a Fellow, and he lives in East Sussex.