Before I Get Old: The Story of the Who 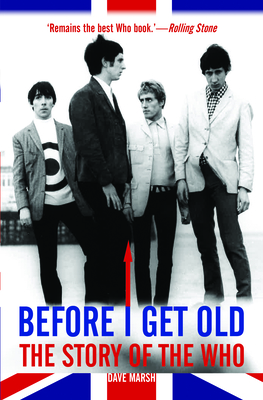 Before I Get Old: The Story of the Who

By  Dave Marsh
Paperback
$ 19.95
Out of Stock In Store (Available to Order)

After best-selling Rolling Stone writer Dave Marsh was invited by Pete Townshend to write a history of legendary band the Who, he spent three years investigating and researching their story. The result is the first in-depth biography of the band, discarding the myth and nonsense which has become so much a part of the usual Who coverage. Before I Get Old tells the story of not one but six personalities - guitarist Pete Townshend, bassist John Entwistle, drummer Keith Moon and singer Roger Daltrey plus their original managers Kit Lambert and Chris Stamp. It describes the group's origins in the steamy nightlife of London, charts their meteoric rise to fame, and describes the creation of the rock opera Tommy which turned them into superstars. Here is the pathos, the laughter, the crazy world they worked in, the drugs, the destruction, the vandalism, the debts, the multi-million-dollar tours, and of course the music. In short, this story contains every inch of the fascinating, shocking, hilarious, and provocatively relevant material that makes up the Who and their wild lives and careers. Before I Get Old is essential reading, an exhaustive study of an exhausting band, who have always lived up to their legend.

Dave Marsh founded Creem magazine at the age of nineteen. He was the Newsday rock critic from 1973 to 1974, before joining Rolling Stone as an associate editor and columnist in 1975. He went on to become a best-selling author and has also contributed to a wide variety of New York-based and national publications, chiefly on his specialist subjects of rock 'n' roll and sports.