Farm the City: A Toolkit for Setting Up a Successful Urban Farm 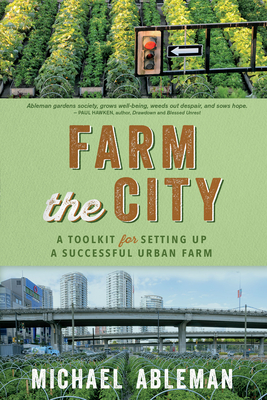 Farm the City: A Toolkit for Setting Up a Successful Urban Farm

By  Michael Ableman
$ 19.99
Out of Stock In Store (Available to Order)

In Farm the City, Michael Ableman, the Spartacus of Sustainable Food Activism, offers a guide to setting up and running a successful urban farm, derived from the success of Sole Food Street Farms, one of the largest urban agriculture enterprises in North America. Sole Food Street Farms spans four acres of land in Vancouver, produces 25 tons of food annually, provides meaningful work for dozens of disadvantaged people, and has improved the surrounding community in countless ways. Coverage includes:

Farm the City is an invaluable tool kit for entrepreneurs and activists looking to create economic and social value through urban agriculture.

Urban farming has the power to change diets, economies, and lives. Yet starting an urban farm can seem daunting with skills and knowledge that extend beyond growing to include marketing, sales, employees, community relations, and navigating local regulations. With this comprehensive guide, you'll be running a successful urban farm in no time.

Michael Ableman has been a commercial organic farmer for the past 45 years. He is one of the early visionaries of the urban agricultural movement and founder of the nonprofit Center for Urban Agriculture. He has helped create high-profile urban farms in Watts and Goleta, California, and is co-founder and director of Sole Food Street Farms in Vancouver, British Columbia. Ableman is author of numerous books, including From the Good Earth, On Good Land, Fields of Plenty, and Street Farm. He is the subject of the award-winning PBS film Beyond Organic narrated by Meryl Streep. His work in Vancouver is profiled in the feature-length documentary A New Economy, and he is featured in the film The Evolution of Organic, which chronicles the birth of the organic food movement. He currently lives and farms with his family at the historic 120-acre Foxglove Farm on Salt Spring Island, BC. www.michaelableman.com