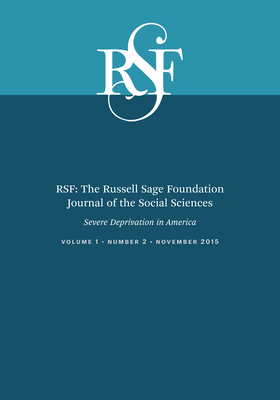 Widening inequality has received much attention recently, but most of the focus has been on the top one percent or the middle class. The problems of those at the very bottom of society remain largely invisible. Along with the Great Recession, factors such as rising housing costs, welfare reform, mass incarceration, suppressed wages, and pervasive joblessness have contributed to deepening poverty in America. In this inaugural double issue of RSF: The Russell Sage Foundation Journal of the Social Sciences, a distinguished roster of poverty scholars from multiple disciplines focuses on families experiencing “severe deprivation”: acute, compounded, and persistent economic hardship.

Over twenty million families in America live in deep poverty, on incomes below half the federal poverty threshold, yet Liana Fox and colleagues find that government taxes and transfers lift millions of families out of deep poverty each year. Searching even further below  the poverty line, Luke Shaefer, Kathryn Edin, and Elizabeth Talbert  find that the number of children in households experiencing chronic  extreme poverty—living on $2 or less per day—increased by over 240  percent between 1996 and 2012. Focusing on the elderly, Helen Levy shows that failing health exacerbates low-income seniors’ hardship by driving up their out-of-pocket medical spending. Other contributors examine the relationship between violence and severe deprivation.

Through longitudinal interviews with former prisoners in Boston, Bruce Western reveals the ubiquity of violence in the life course of disadvantaged young men. And Laurence Ralph draws on years of ethnography in Chicago to document how families and communities cope with the trauma of gun violence. Other studies in this
issue show that mass incarceration has changed the nature of poverty  in recent decades, with consequences ranging from increased levels of deprivation among children of incarcerated parents to housing insecurity among parolees, which increases their risk for recidivism. Finally, several papers devise novel methods and concepts relevant to the study of severe deprivation. Kristin Perkin and Robert Sampson develop an innovative measure of “compounded disadvantage” that groups individual and ecological hardship, while Megan Comfort and colleagues pioneer a new approach to ethnographic fieldwork that combines embedded social work with participant observation.

This issue provides in-depth analyses of the causes and human costs of extreme disadvantage in one of the richest countries in the world and offers a new paradigm for understanding the changing face of poverty in America. In an age of economic extremes, understanding how and why severe deprivation persists will be vital for policymakers and practitioners attempting to deliver relief to the nation’s most marginalized families.

MATTHEW DESMOND is associate professor of sociology and social Sciences at Harvard University and co-director of the Justice and Poverty Project.