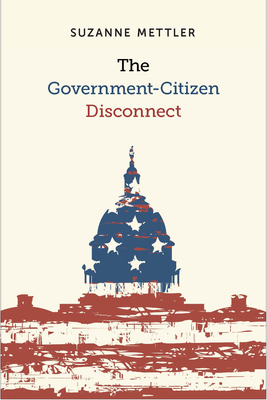 By  Suzanne Mettler
$ 29.95
Out of Stock In Store (Available to Order)

Americans’ relationship to the federal government is paradoxical. Polls show that public opinion regarding the government has plummeted to all-time lows, with only one in five saying they trust the government or believe that it operates in their interest. Yet, at the same time, more Americans than ever benefit from some form of government social provision. Political scientist Suzanne Mettler calls this growing gulf between people’s perceptions of government and the actual role it plays in their lives the "government-citizen disconnect." In The Government-Citizen Disconnect, she explores the rise of this phenomenon and its implications for policymaking and politics.

Drawing from original survey data which probed Americans’ experiences of 21 federal social policies -- such as food stamps, Social Security, Medicaid, and the home mortgage interest deduction -- Mettler shows that 96 percent of adults have received benefits from at least one of them, and that the average person has utilized five. Overall usage rates transcend social, economic, and political divisions, and most Americans report positive experiences of their policy experiences. However, the fact that they have benefited from these policies has little positive effect on people’s attitudes toward government.  Mettler finds that shared identities and group affiliations, as well as ideological forces, are more powerful and consistent influences. In particular, those who oppose welfare tend to extrapolate their unfavorable views of it to government in general. Deep antipathy toward the government has emerged as the result of a conservative movement that has waged a war on social welfare policies for over forty years, even as economic inequality and benefit use have increased.

Mettler finds that voting patterns exacerbate the government-citizen disconnect, as those holding positive views of federal programs and supporting expanded benefits have lower rates of political participation than those holding more hostile views of the government. As a result, the loudest political voice belongs to those who have benefited from policies but who give government little credit for their economic well-being, seeing their success more as a matter of their own deservingness. This contributes to the election of politicians who advocate cutting federal social programs. According to Mettler, the government-citizen disconnect frays the bonds of representative government and democracy.

The Government-Citizen Disconnect illuminates a paradox that increasingly shapes American politics. Mettler's examination of hostility toward government at a time when most Americans will at some point rely on the social benefits it provides helps us better understand the roots of today's fractious political climate.