Achieving Anew: How New Immigrants Do in American Schools, Jobs, and Neighborhoods 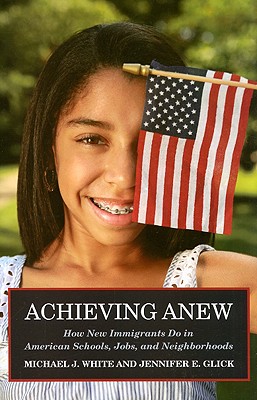 Achieving Anew: How New Immigrants Do in American Schools, Jobs, and Neighborhoods

Can the recent influx of immigrants successfully enter the mainstream of American life, or will many of them fail to thrive and become part of a permanent underclass? Achieving Anew examines immigrant life in school, at work, and in communities and demonstrates that recent immigrants and their children do make substantial progress over time, both within and between generations. From policymakers to private citizens, our national conversation on immigration has consistently questioned the country's ability to absorb increasing numbers of foreign nationals--now nearly one million legal entrants per year. Using census data, longitudinal education surveys, and other data, Michael White and Jennifer Glick place their study of new immigrant achievement within a context of recent developments in assimilation theory and policies regulating who gets in and what happens to them upon arrival. They find that immigrant status itself is not an important predictor of educational achievement. First-generation immigrants arrive in the United States with less education than native-born Americans, but by the second and third generation, the children of immigrants are just as successful in school as native-born students with equivalent social and economic background. As with prior studies, the effects of socioeconomic background and family structure show through strongly. On education attainment, race and ethnicity have a strong impact on achievement initially, but less over time. Looking at the labor force, White and Glick find no evidence to confirm the often-voiced worry that recent immigrants and their children are falling behind earlier arrivals. On the contrary, immigrants of more recent vintage tend to catch up to the occupational status of natives more quickly than in the past. Family background, educational preparation, and race/ethnicity all play a role in labor market success, just as they do for the native born, but the offspring of immigrants suffer no disadvantage due to their immigrant origins. New immigrants continue to live in segregated neighborhoods, though with less prevalence than native black-white segregation. Immigrants who arrived in the 1960s are now much less segregated than recent arrivals. Indeed, the authors find that residential segregation declines both within and across generations. Yet black and Mexican immigrants are more segregated from whites than other groups, showing that race and economic status still remain powerful influences on where immigrants live. Although the picture is mixed and the continuing significance of racial factors remains a concern, Achieving Anew provides compelling reassurance that the recent wave of immigrants is making impressive progress in joining the American mainstream. The process of assimilation is not broken, the advent of a new underclass is not imminent, and the efforts to argue for the restriction of immigration based on these fears are largely mistaken.