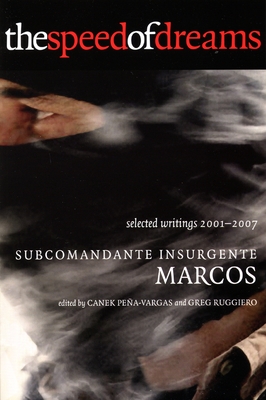 By  Subcomandante Insurgente Marcos
$ 17.95
Out of Stock In Store (Available to Order)

Since the publication of Our Word Is Our Weapon--which Publishers Weekly described as "strong as dignity and as subtle as love"--Mexico's enigmatic Zapatista leader has written some of his most brilliant and complex works. From a retelling of indigenous myths and legends, to visions of the future of Mexico, from searing critiques of the US war in Iraq, to clandestine radio broadcasts from the jungles of Chiapas, here is an amazing selection of writing that gives voice to the literary and poetic genius of Latin America's greatest living writer and rebel.

Subcomandante Marcos is a spokesperson and strategist for the Zapatistas.

ABSURD Thus the man known around the world as Subcomandante Marcos, soldier, revolutionary, poet, philosopher, and spokesman for the Ej rcito Zapatista de Liberaci n Nacional (EZLN), describes the political situations that exist in the world today. It is absurd that he lives in a country that has produced the world's most wealthy individual but in which over 40 percent of the population lives in dire poverty. . . . Marcos' book, The Speed of Dreams, is a collection of translated writings arranged in more or less chronological order by the editors. They include presentations that Marcos made at forums and during marches throughout Mexico and delightful philosophical musings that Marcos attributes to devils, children, and a hardshelled Lacand n beetle named Durito who rides a skateboard and calls the Sup 'used-underwear face.'--Robert Joe Stout, New Politics

A bead of sweat is visible through the eyehole of his famous black balaclava. Latin America's most celebrated living rebel must be feeling the heat, but a glass of water would mean taking off the mask and that is out of the question. He makes do with a puff on his pipe, and a subject that is close to his heart . . . --The Guardian

In November 2003, within the context of the 20th anniversary of the foundation of the Zapatista Army of National Liberation (EZLN) and the 10th anniversary of the indigenous insurrection that shook the world, the Mexican magazine Rebeld a coordinated the Campaign EZLN: 20 and 10, The Fire and the Word. Within the framework of these two anniversaries, a series of materials was developed that gathered works created by painters, photographers, video makers, and musicians from around the world who have been influenced by Zapatista discourse and practice. Additionally, a book on the history of the EZLN, with the same title as the campaign, was presented together with the largest and most emblematic photographic exhibit in the history of Zapatismo, the most representative musical memory of this first decade of political struggle, and a video that, like the book, brings together pieces of that history.--Gloria Mu oz Ram rez

Nativity scenes are plentiful in San Crist bal de las Casas, a colonial city in the highlands of Chiapas, Mexico. But the one that greets visitors at the entrance to the TierrAdentro cultural center has a local twist: figurines on donkeys wear miniature ski masks and carry wooden guns. It is high season for 'Zapatourism, ' the industry of international travelers that has sprung up around the indigenous uprising here, and TierrAdentro is ground zero.--Naomi Klein, The Nation

This volume collects writings by Mexican Zapatista insurgent Subcomandante Marcos made public following the publication of Our Word Is Our Weapon in 2001. Among the 40 writings collected are 'literary' allegorical, philosophical, and poetic texts, as well as shorter examples of historical or logistical communiqu's that the editors feel 'reflect the poetics of praxis.'--Book News Inc.

In Chiapas, these are complicated times, in an even more complicated place. The desire for knowledge refuses simple answers and instead offers itself in the form of new questions. To a visiting traveler, valuable insights drift elusively through the air. In moments like these, expect to be disoriented, because this is a place where disparate worlds meet, mingle, or collide.--Canek Pe a-Vargas and Greg Ruggiero, ZNet

Subcomandante Insurgente Marcos describes himself as the spokesperson for the Zapatista Army of National Liberation (EZLN). Describing himself, Marcos states, Marcos is gay in San Francisco, black in South Africa, an Asian in Europe, a Chicano in San Ysidro, an anarchist in Spain, a Palestinian in Israel . . . Marcos is all the exploited, marginalized and oppressed minorities, resisting and saying, 'Enough'!