To Die for the People: The Writings of Huey P. Newton 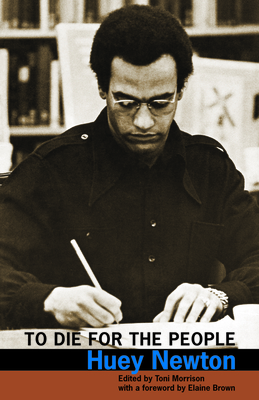 To Die for the People: The Writings of Huey P. Newton

By  Huey Newton , Editor  Toni Morrison , Introduction by  Elaine Brown
$ 16.95
Out of Stock In Store

A fascinating, first-person account of a historic era in the struggle for black empowerment in America.

Long an iconic figure for radicals, Huey Newton is now being discovered by those interested in the history of America's social movements. Was he a gifted leader of his people or a dangerous outlaw? Were the Black Panthers heroes or terrorists?

Whether Newton and the Panthers are remembered in a positive or a negative light, no one questions Newton's status as one of America's most important revolutionaries. To Die for the People is a recently issued classic collection of his writings and speeches, tracing the development of Newton's personal and political thinking, as well as the radical changes that took place in the formative years of the Black Panther Party.

With a rare and persuasive honesty, To Die for the People records the Party's internal struggles, rivalries and contradictions, and the result is a fascinating look back at a young revolutionary group determined to find ways to deal with the injustice it saw in American society. And, as a new foreword by Elaine Brown makes eminently clear, Newton's prescience and foresight make these documents strikingly pertinent today.

Huey Newton was the founder, leader and chief theoretician of the Black Panther Party, and one of America's most dynamic and important revolutionary philosophers.

Huey P. Newton's To Die for the People represents one of the most important analyses of the politics of race, black radicalism, and democracy written during the civil rights-Black Power era. It remains a crucial and indispensible text in our contemporary efforts to understand the continuous legacy of social movements of the 1960s and 1970s.
--Peniel Joseph, author of Waiting Til the Midnight Hour: A Narrative History of Black Power in America

Huey P. Newton's name, and more importantly, his history of resistance and struggle, is little more than a mystery for many younger people. The name of a third-rate rapper is more familiar to the average Black youth, and that's hardly surprising, for the public school system is invested in ignorance, and Huey P. Newton was a rebel -- and more, a Black Revolutionary . . . who gave his best to the Black Freedom movement; who inspired millions of others to stand.
--Mumia Abu Jamal, political prisoner and author of Jailhouse Lawyers

Newton's ability to see theoretically, beyond most individuals of his time, is part of his genius. The opportunity to recognize that genius and see its applicability to our own times is what is most significant about this new edition.
--Robert Stanley Oden, former Panther, Professor of Government, California State University, Sacramento

Huey Newton was co-founder and leader of the Black Panther Party, and its chief theoretician. In 1967 Newton was arrested and charged with killing an Oakland police officer during a dispute, leading to a much-publicized Free Huey campaign. In 1980, Newton earned a doctorate in philosophy from the University of California. He died in 1989.Toni Morrison is a Nobel-prize winning American author, editor and professor. Among the best known of her novels are The Bluest Eye, Song of Solomon and Beloved, which won the Pulitzer Prize for Fiction in 1988.Elaine Brown became, in 1974, the first and only woman to lead the Black Panther Party. Today, as an activist, writer and popular lecturer, she promotes the vision of an inclusive and egalitarian society, focusing on resolving problems of race, gender oppression and class disparity in the United States.