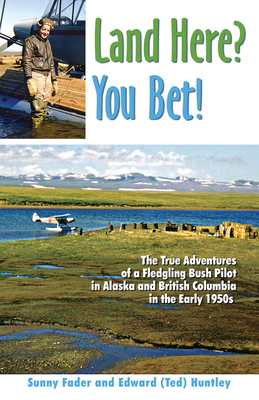 The Adventures of a Fledgling Bush Pilot in the 1950s. A memoir. An adventure tale. It is the spring of 1951 and a twenty-year-old pilot named Ted Huntley begins his initiation into the world of bush flying, realizing a boyhood dream. It is by a stroke of luck that he becomes a last-minute replacement in a team of bush pilots headed for Alaska to work for the Coast and Geodetic Survey, which has the daunting task of mapping the territory of Alaska. The youngest in a team of seasoned pilots, Ted's journey unfolds over two summers in Alaska, as he hauls surveyors and their equipment in a brand-new Super Cub. But it takes one more summer to complete his education, this time in British Columbia, flying men and equipment off and on a glacier for a prospecting company. Land Here You Bet? is a true coming-of-age adventure tale and provides an entertaining primer on bush flying, but it is also a story about having the courage to reach for your dreams. Ted's story is not just an inspiration to aspiring pilots; it's an inspiration to dreamers everywhere reaching for their own stars.