First in Flight: The Wright Brothers in North Carolina 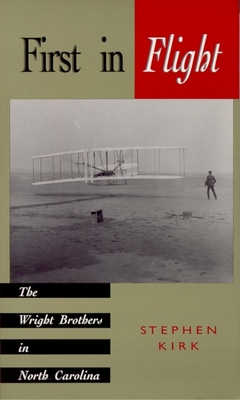 First in Flight: The Wright Brothers in North Carolina

When Wilbur and Orville Wright arrived on North Carolina's Outer Banks in the year 1900, they were unknown bicycle mechanics who dreamed of powered flight. Even after they achieved the first heavier-than-air, powered flight in the dunes of Kill Devil Hills on December 17, 1903, they remained obscure. But by the time of Orville's last flights on the Outer Banks in 1911, they were two of the most famous men of the twentieth century. In First in Flight, author Stephen Kirk describes in marvelous detail the undeniable influence that the landscape and people of the Outer Banks had on the Wright Brothers' quest for flight and, in turn, the lasting effect that the Wright brothers' success had on this once-desolate region. With its lively and often humorous narrative, First in Flight presents a broader context for the Wrights' activities on the Outer Banks than any other book about the famous brothers. It details every aspect of the Wrights' life on the North Carolina coast--the lifesavers they associated with, the local citizens they befriended, the other outsiders who came to the Outer Banks to participate in and report on their experiments, the Wrights' perspective on local lifestyles, and the locals' perspective on them.

Stephen Kirk was an editor at John F. Blair, Publisher, for 27 years. He has a B.A. from St. Lawrence University and an M.F.A. from UNC-Greensboro. A story he wrote while working on his M.F.A. appeared in the Greensboro Review and was subsequently selected by John Updike for reprinting in the Best American Short Stories series. Since then, he has written First in Flight: The Wright Brothers in North Carolina and Scribblers: Stalking the Authors of Appalachia. He lives in Winston-Salem, North Carolina.