The Propensity of Things: Toward a History of Efficacy in China 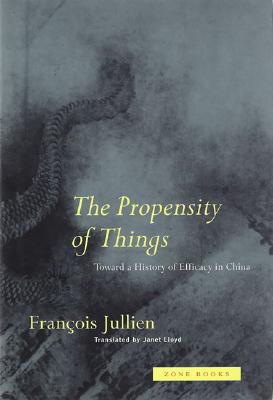 The Propensity of Things: Toward a History of Efficacy in China

By  Francois Jullien , Translator  Janet Lloyd
Paperback
$ 25.95
Out of Stock In Store

In this book, his first to appear in English, French sinologist Fran ois Jullien uses the Chinese concept of shi--meaning disposition or circumstance, power or potential--as a touchstone to explore Chinese culture and to uncover the intricate structure underlying Chinese modes of thinking.

In this strikingly original contribution to our understanding of Chinese philosophy, Fran ois Julien, a French sinologist whose work has not yet appeared in English, uses the Chinese concept of shi--meaning disposition or circumstance, power or potential--as a touchstone to explore Chinese culture and to uncover the intricate and coherent structure underlying Chinese modes of thinking.

A Hegelian prejudice still haunts studies of ancient Chinese civilization: Chinese thought, never able to evolve beyond a cosmological point of view, with an indifference to any notion of telos, sought to interpret reality solely on the basis of itself. In this groundbreaking study, prejudices toward the simplicity and naivet of Chinese thought, Hegelian and otherwise, are dismantled one by one to reveal the intricate and coherent structure underlying Chinese modes of thinking and representing reality.

Jullien begins with a single Chinese term, shi, whose very ambivalence and disconcerting polysemy, on the one hand, and simple efficacy, on the other, defy the order of a concept. Yet shi insinuates itself into the ordering and conditioning of reality in all its manifold and complex representations. Because shi neither gave rise to any coherent, general analysis nor figured as one of the major concepts among Chinese thinkers, Jullien follows its appearance from one field to another: from military strategy to politics; from the aesthetics of calligraphy and painting to the theory of literature; and from reflection on history to first philosophy. At the point where these various domains intersect, a fundamental intuition assumed self-evident for centuries emerges, namely, that reality - every kind of reality - may be perceived as a particular deployment or arrangement of things to be relied upon and worked to one's advantage. Art or wisdom, as conceived by the Chinese, lies in strategically exploiting the propensity that emanates from this particular configuration of reality.

Francois Jullien is Professor at the Universite Paris VII-Denis Diderot and director at the Institut de la Pensee Contemporaine. He is the author of Detour and Access: Strategies of Meaning in China and Greece, The Propensity of Things: Toward a History of Efficacy in China, and In Praise of Blandness: Proceeding from Chinese Thought and Aesthetics all published by Zone Books.