Curing Japan's America Addiction: How Bush & Koizumi Destroyed Japan's Middle Class and What We Need to Do to Fix It 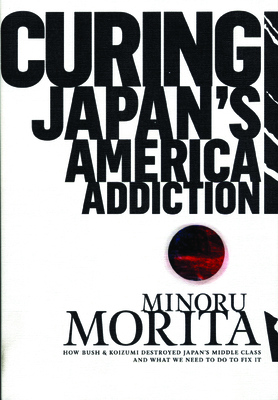 Curing Japan's America Addiction: How Bush & Koizumi Destroyed Japan's Middle Class and What We Need to Do to Fix It

In Curing Japan's America Addiction, Morita says publicly what a lot of Japanese think and say privately, in sharp contrast to whatever pleasantries they offer at cocktail parties with foreign diplomats and policy wonks, or in speeches they give abroad. For that reason, Curing Japan's America Addiction deserves to be read by anybody tired of the Orwellian doublespeak coming out of Washington and Tokyo. -- The Japan Times

Curing Japan's America Addiction is the first work in English from longtime political commentator Minoru Morita. It includes translations from several of his more than forty books. For decades, Morita has been chronicling in passionate, straightforward prose the corruption of the Japan-US relationship since the era of Reagan and Nakasone in the 1980s. Morita argues that Japan has become addicted to the Republican Party's vision of America, with its widening wealth gap; huge, aggressive military; and dog-eat-dog economy. This book is the progressive Left's answer to Shintaro Ishihara's The Japan That Can Say No. For years, Minoru Morita, clad in a kimono, would greet Japanese TV viewers with insightful political commentary on national news shows. But then he went too far. Morita began criticizing the wildly popular Junichiro Koizumi ("the most irresponsible and frivolous prime minister in Japan's postwar history") and connecting the dots between the premier and Japan's largest advertising agency, Dentsu Inc., which Morita claimed was silencing critics by threatening to pull ads. Soon, the offers to appear on TV dried up. Undaunted, Morita took to the lecture circuit and began publishing books describing how the Koizumi administration has "Anglicized Japan's military and Americanized its economy." He has urged voters to overthrow the ruling party, and they seem to be listening: In July 2007, the opposition took over the upper house for the first time in sixty years.

Minoru Morita used to appear on Japanese TV regularly as a political commentator, but his progressive views and outspoken criticism of the popular former prime minister Koizumi alienated major media outlets. He now runs a thinktank, Morita Research Institute, and lectures and writes. He has published more than 30 books in Japanese on politics, media and society.