Kwanzaa Gets an A 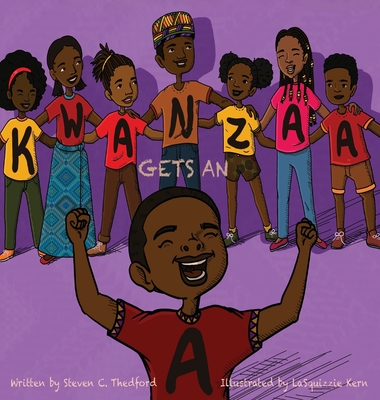 Kwanzaa Gets an A

By  Steven Christopher Thedford , Illustrated By  Lasquizzie Kern
$ 24.99
Out of Stock In Store (Available to Order)

The African American Holiday of Kwanzaa derives its name from the lingua franca of East Africa, Swahili. Additionally, the names and principles of the holiday are also derived from the language. Many people believe that Dr. Karenga chose Swahili because it is the largest language spoken by Africans across the continent. Moreover, Kwanzaa derived its name from the phrase matunda ya kwanza ("first fruits"). Yet, as you may have noticed, Kwanza has only one "a" in the expression, but the Kwanzaa that is celebrated by millions of people has two A's. Why is that so?

Well, you'll get many answers if you read books about Kwanzaa. For example, in James C. Anyke's book African American Holidays, he states that the extra "a" was added "to distinguish this celebration as an African American Holiday." Furthermore, The Children's Book of Kwanzaa by Dolores Johnson elucidates that the extra 'a' was added "to give the holiday greater significance." After reading and analyzing several different explanations, I decided to directly approach the source. Therefore, I reviewed the books written by Dr. Karenga on the origins of Kwanzaa. According to those sources, I discovered that the extra "a" was attributed to the fact that Dr. Karenga wanted all seven children present at the first Kwanzaa to participate in the program.

Moreover, uncovering these facts inspired me to write a picture book: Kwanzaa Gets an A. Using Dr. Karenga's book as a guide, Kwanzaa Gets An A narrates the story about the manner in which the name of the holiday came into existence using a griot, an African storyteller. Consequently, the book was written to be an interactive experience where children participate, call and respond. Put succinctly, as the griot tells the story of Kwanzaa Gets an A, the children respond Ashe (ah-Shay), a West African word that means to bring about change.