Architects of Repression: How Israel and Its Lobby Put Racism, Violence and Injustice at the Center of US Middle East Policy 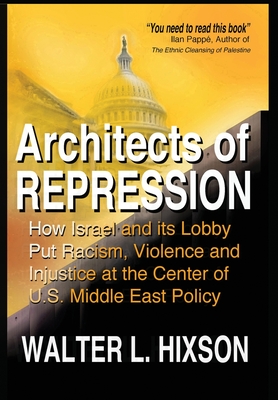 Architects of Repression: How Israel and Its Lobby Put Racism, Violence and Injustice at the Center of US Middle East Policy

Walter L. Hixson since 2019 serves as columnist and contributing editor at the Washington Report on Middle East Affairs. This is his second book on the Israel lobby following Israel's Armor: The Israel Lobby and the First Generation of the Palestine Conflict. (Cambridge University Press, 2019) He is the author of several books focused on the history of US foreign relations, including American Foreign Relations: A New Diplomatic History (Routledge, 2015), American Settler Colonialism: A History (2013, Palgrave-Macmillan), The Myth of American Diplomacy: National Identity and U.S. Foreign Policy (Yale University Press, 2008). More at www.WalterHixson.com.

This book offers a compelling history of the most powerful lobby acting on behalf of a foreign government in all of American history. The book puts to rest any doubt as to whether the Israel lobby has played and continues to play the crucial role in enabling aggression, the suppression of Palestinian rights, and the failure to achieve a comprehensive Middle East peace accord.

Rooted in archival evidence and an abundant secondary literature, Architects of Repression shows how AIPAC and other Israel affinity groups deploy propaganda, target campaign contributions, organize demonstrations, and exert political pressure to manage public opinion-and, especially, to influence the Congress. The massive foreign aid that the United States has provided Israel-far more than allocated to any other country and dispersed on favorable terms reserved for Israel alone--is only one of many enabling benefits the small Zionist state has received over many decades from the most powerful nation in the world.

For decades, as the book explains in depth, the Israel lobby has played the pivotal role as the US enabled Israel's disdain for a negotiated settlement of the Middle East conflict; its contemptuous dismissal of the plight of Palestinian refugees; its cultivation of nuclear weapons in defiance of the global nuclear non-proliferation movement; its profusion of palpably racist, illegal and destabilizing Jewish-only settlements; its takeover of Jerusalem, much of the West Bank, and the Golan Heights; and its ongoing violent aggression, which has victimized Palestinians in the West Bank and the Gaza Strip as well as neighboring states notably Lebanon. In more recent years the Israel lobby launched a campaign to criminalize political engagement and freedom of speech by equating criticism of Israel with anti-Semitism. Hixson convincingly reveals that there will never be peace in the Middle East until the monolithic Israel lobby is neutralized.