Farmer Will Allen and the Growing Table (Food Heroes) 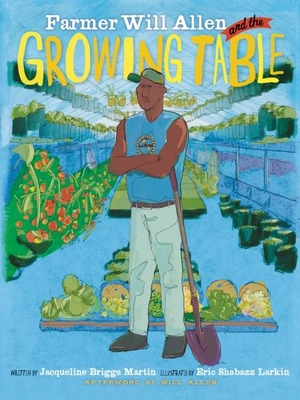 Farmer Will Allen and the Growing Table (Food Heroes)

By  Jacqueline Briggs Martin , Illustrated By  Eric-Shabazz Larkin , Afterword by  Will Allen
Paperback
$ 9.95
Out of Stock In Store (Click to Order)

Will Allen is no ordinary farmer. A former basketball star, he's as tall as his truck, and he can hold a cabbage--or a basketball--in one hand. But what is most special about Farmer Will is that he can see what others can't see. When he looked at an abandoned city lot in Milwaukee he saw a huge table, big enough to feed the whole world.

No space, no problem. Poor soil, there's a solution. Need help, found it. Farmer Will is a genius in solving problems. In 2008, the MacArthur Foundation named him one for his innovative urban farming methods, including aquaponics and hydroponics. Jacqueline Briggs Martin, author of the Caldecott Medal winner, Snowflake Bentley, and Alice Waters and the Trip to Delicious , along with debut artist Eric-Shabazz Larkin's striking artwork, tells the inspiring story of the African American innovator, educator, and community builder. Farmer Will Allen is the first book of Martin's Food Heroes series, followed by Alice Waters and the Trip to Delicious. In 2015, it was selected by Points of Light Foundation to set a new Guinness World Record for the most children reading the same book across the globe to promote literacy. Nearly 300,000 participated.

Jacqueline Briggs Martin's many children's books include Snowflake Bentley, winner of the Caldecott Medal, and Alice Waters and the Trip to Delicious, a School Library Journal starred review book and the follow up to Farmer Will Allen and the Growing Table, part of the Food Hero series about people who changed what and how we eat. She grew up on a farm in Maine and now lives in Mt. Vernon, Iowa. Eric-Shabazz Larkin made his illustration debut with Farmer Will Allen and the Growing Table in 2013 and his author-illustrator debut with A Moose Boosh: A Few Choice Words About Food in 2014. Both were named American Library Association Notable Children's Books. He lives in New York City. Will Allen is a farmer and founder and CEO of Growing Power in Milwaukee, Wisconsin. He is recognized as a preeminent practitioner of urban agriculture in America and throughout the world. A former basketball star, he was named a MacArthur Genius Fellow in 2008 and Time magazine's 100 Most Influential People in the World in 2010.