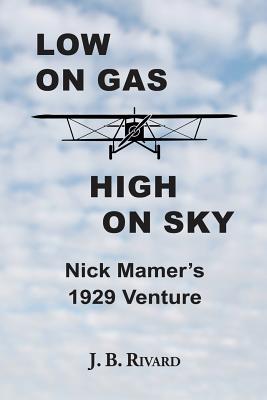 Nearly blind in the velvet blackness of night in the thin air over Rock Springs, Wyoming, the pilot can only aim at the glowing exhaust overhead. At 85 miles an hour, he feathers the airplane's throttle and pulls to within a few dozen feet of the plane directly above him. Out of the blackness, a hose appears. Skimming inches below its flailing nozzle, Nick Mamer eases his biplane closer, so his copilot can capture the hose and fill his tank with gasoline.

In 1929, this dance with death is the only way to refuel--in flight. Mamer, pilot of the Spokane Sun God, is a 31-year old from Washington state. He's attempting a world record by flying from Spokane, Washington to San Francisco, from there to New York, and from New York back to Spokane--without landing.

Without warning, the Sun God's propeller strikes the hose, slicing it in two. The severed part slams onto copilot Art Walker, dousing him with gasoline. An explosive cloud of gas fills the air. If ignited by a spark from the motors' hot exhausts, the planes and men will roast.

During the flight of 6,200 miles in their Whirlwind-powered airplane these airmen survive this crisis, plus unplanned headwinds, a fierce electrical storm, treacherous passes in the Rockies and more. The stress and their near exhaustion during five days aloft means only imaginative actions and extraordinary determination will yield success.

Low on Gas - High on Sky tells the true story of this unparalleled adventure. With exclusive access to the massive archives of the Mamer family, author J. B. Rivard includes never-before-seen photos, notes, a glossary, and a comprehensive index. The book melds the gripping history of the flight of the Spokane Sun God with the vibrant life of the man who led it.

Long before the days of jet planes, Nick Mamer and co-pilot Art Walker set an awe-inspiring record. They flew from Spokane, Washington to San Francisco, to New York, and from New York back to Spokane--without landing.

This is the true story of the 1929 flight--during which their airplane was again and again refueled in the air with ropes and hose--by other daring airmen flying wood-and-fabric airplanes.

J. B. Rivard, acclaimed author of the historical novel, Illusions of Magic, here recounts a true aerial adventure that triumphs over seemingly impossible odds. With access to thousands of clippings, documents and photos preserved by the Mamer family, he provides the inside story of this remarkable flight and the life of the man who led it.