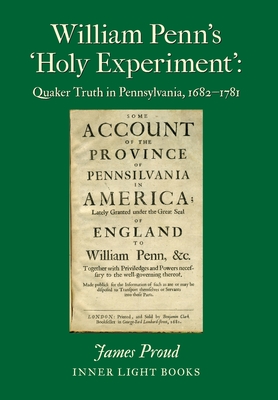 By  James Proud , Editor  Charles H. Martin
Hardcover
$ 50.00
Out of Stock In Store (Available to Order)

William Penn's life was, at its core, a search for peace. This study concentrates attention on his greatest effort to secure true peace for all--his undertaking to populate and cultivate the region of North America granted him by the English Crown in March 1681.

Penn intended that Pennsylvania should be a haven for seekers of religious freedom and liberty of conscience, especially those who, for the sake of faith and principle, had suffered property forfeiture or bodily imprisonment during the persecutions of the English Civil War, Commonwealth, Protectorate, and Restoration. In commenting on how he had acquired Pennsylvania and what ends it might serve, Penn wrote to William Harrison:

For my country, I eyed] the Lord in the obtaining of it; and more was I drawn inward to look to Him, and to o we it] to His hand and power, than to any ot her way]. I have so obtained it and desire that I may not be unworthy of His love, but do that which may answer yet His kind providence and serve His Truth and people; that an example may be set up to the nations. There may be room there, though not here, for such a holy experiment

This book traces the historical progress of the foremost themes of the holy experiment from 1681, when Penn wrote the above letter to Harrison. These themes were most fully realized by the 1750s, but the holy experiment continued until 1781, when the experiment was finally laid down. The great themes of the experiment, in addition to the founding principles of peace grounded in religious freedom and liberty of conscience, were public education, preserving friendship with the Native Americans, and abolishing the evil of slavery. By the end of the experiment in 1781, both successes and failures had been realized, successes and failures that continue to underlie the society America has become since those days of its birthing at Philadelphia when the founding fathers gave order to the United States.

James Proud is an attorney, now retired, and a priest of the Episcopal Church. Proud is the editor of John Woolman and the A airs of Truth, published by Inner Light Books in 2010.