Lies Our Leaders Tell Us 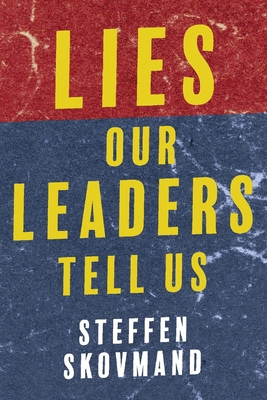 Lies Our Leaders Tell Us

In matters political, and not least during the present hailstorm of lies from our leaders concerning the origins of and political responsibility for the Coronavirus pandemic, I have often wondered whether somewhere there was a fool-proof way of knowing when something I see on TV or read in the papers is not true. A tool which tells me without having to dig deeper, that what I am hearing, seeing and reading cannot be true.
My book, Lies our Leaders Tell Us:How Cultural Marxism Staged a Comeback-In the West is my attempt to come up with the tools to answer these questions.
The first tool is Karl Popper´s falsification test: if any one statement can be falsified, such as there are no black swans, when black swans have in fact been found in Australia, that statement cannot be based on fact. When WHO says publicly in a tweet dated January 14,2020, that there is no risk of human-to-human transmission and we know Taiwanese authorities told them the opposite in December 2019, we know WHO is lying.
The second tool is that of the dismal science, economics, namely, to teach our reader to ask a simple question: compared to what? The Coronavirus pandemic is undoubtedly a serious health challenge for the West, but the risk of death is small for otherwise healthy individuals,34.000 Americans died of flu in the 2018-19 flu season and serious treatments are quite likely to be on hand shortly.
The third tool, is that old police chestnut: cui bono? Who benefits from the lies? The short answer: our political leaders. Not just because they are covering up, like the WHO, but because our political elites in the West,as opposed to those of countries with few Coronavirus problems like Taiwan, Hong Kong and Singapore who all had learned from their 2003 experience with another bad flu, SARS, were woefully unprepared and slow to level with their populations.
Lies Our Leaders Tell Us takes its readers on a non-fiction picaresque journey on A Ship of Fools. Like all picaresque stories from Henry Fielding´s Tom Jones to Jack Kerouac´s On the Road, the book is a story about growing up.
Only the backdrop is not that of 18th century England or 1950s America, but the Western World of to-day, roughly defined as the U.S. and the EU, anno 2020.
And the characters doing the journey are not fictional but us- the readers. We are the ones growing up.
We set out on the Ship´s journey with a vague feeling that something is not right. If so many of our leaders have to lie so much about so many things, there must be something they don´t want us to know: The Truth.
The book´s narrative structure is the old classical Greek concept of a Ship of Fools, a metaphor for groupthink.
At our Ship´s every port of call, from that of Nationalism-is- the- root- of- all -evil to that of Implicit- racism -inflicts- all- of- us, this feeling takes on a firmer foundation.
The chapters of the book take our reader through the main areas where he is being lied to by his leaders. Each chapter is structured the same way; first, it names the lie which is up for debate, then it presents quotes exemplifying the lie and after that the facts debunking the lie.
At the end of the journey we know something is not right and now we know what it is: we live in an age of permanent adolescence, of half -truths and pseudo-science and fictions, whose main philosophy, that of Neo-Marxist Postmodernism, has moved from the fringes of the Universities´ Humanities Departments to main-stream in a matter of less than a decade.
Postmodernism, in its political manifestations has taken over the main bastions of our culture since the Enlightenment, free speech, individual rights, civil right, human rights equality of opportunity and turned them into vehicles for undermining present day capitalist society in order to set up their preferred Marxist-inspired Socialist Utopia, the book argues.
It may seem to the uninitiated as just a culture of constant teenage rebellion whose very emblem is a physically immature but intel