I Smuggled Drugs for God 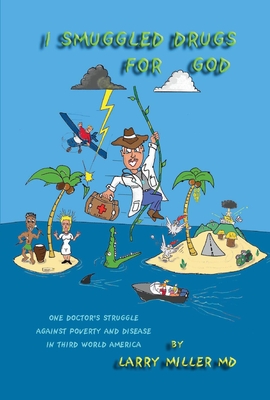 I Smuggled Drugs for God

I Smuggled Drugs for God includes more than 95 of the most human, outrageous, memorable, inspiring, and, yes, weirdest and funniest incidents of Doctor Miller's missions in the Caribbean. While each is a story unto itself, the episodes trace his development as a physician and are woven together by his underlying philosophy emphasizing a humanitarian and faith-based approach to patient care.

The stories are also enriched by illustrating his thought processes and reveal tightly held secrets that until now only medical "insiders" knew. Readers will not only be entertained by the situation, but will also gain a rare understanding of the dynamics that give missionary medicine such powerful appeal. His is a long-term view of a world few people can experience, but one which many find irresistible.

Readers will learn about suicide and the red snake, how two mysterious stomach aches were caused by a visitor from New York, and find out why Doctor Miller had to decapitate a baby and become a drug smuggler. Despite this, he was honored for saving thousands of lives. Every story is a grabber; every one is true.

With the tremendous interest in helping developing nations around the world, you will be surprised to know what it was really like to be a medical missionary in these countries. Dr. Miller's book illustrates graphically what is involved and how anyone can make a difference, but just as important, he shows you how to have a blast doing it. Before launching out on your own for a short-term mission or a life-long commitment, be sure to read I Smuggled Drugs for God.

Dr. Larry J. Miller practiced emergency medicine for more than 30 years in one of Texas' largest inner-city hospitals. Since training at Chicago's Cook County Hospital, where he earned the Intern of the Year Award in 1966, he has personally treated more than 130,000 emergency patients. He was chairman of the Emergency Departments of the 5 Baptist hospitals in San Antonio for more than 15 years and Medical Director for 10 EMS agencies in South Texas for more than 30 years.

He volunteered as a missionary doctor for three years at Hospital Castañer in Puerto Rico, a rural total health care facility serving approximately 20,000 patients. He was the founder and director of the OEO (Office of Economic Opportunity) Health Care Project in Indiera Alta, Puerto Rico. He has traveled extensively throughout the Caribbean and South America, working at remote hospitals and public health facilities in Costa Rica, Dominican Republic, Haiti, Venezuela, Ecuador, and Colombia.

Since his company sold to Teleflex in 2013, he has practiced urgent care medicine and is the medical director of Acacia Medical Missions in Spring Branch, Texas, a clinic serving the under and uninsured patients of South Texas. He is a major hands-on sponsor of Medical/dental missions in El Salvador through Christ for the City International.

Through this vast experience he has encountered some truly incredible situations. Dealing with them has given him a unique insight into missionary and humanitarian medicine in Third World Countries.