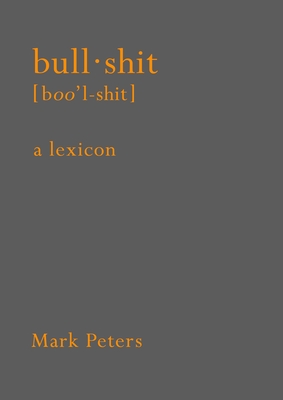 An irreverent lexicon of the seemingly infinite ways we call bullshit, written by a McSweeney's columnist and etymologist, illustrated by a New Yorker-contributing cartoonist.

What's the difference between "balderdash" and "drivel"? Where did "mumbo-jumbo" come from? How should you use "meadow mayonnaise"? What's "felgercarb" and which popular TV show coined it?

There are hundreds of common and rare terms for bullshit in English, including borrowings from German, turn-of-the-century sailors, The Simpsons, and beyond. Bullshit is everywhere, but not all of it is created equal. Mark Peters's Bullshit: A Lexicon is the handy guide to identifying and calling BS in all of its many forms, from "bunk" and "claptrap" to "applesauce" and "gobbledygook." Packed with historical facts, pop culture tidbits, and definitions for each term, Bullshit is perfect for humor readers, language lovers, and anyone looking to describe life's everyday annoyances.

MARK PETERS is a language expert, humorist, and member of the American Dialect Society. He has a PhD in English and has published articles about language for Esquire, Forbes, Mental Floss, Slate, Columbia Journalism Review, and Visual Thesaurus, where he writes the Evasive Maneuvers column about euphemisms. Mark also writes humor pieces, comedy sketches, and Twitter jokes (@wordlust), plus the Best Joke Ever column for McSweeney’s and the Laughing Stock blog for Psychology Today.

DREW DERNAVICH is a cartoonist and illustrator who regularly contributes to The New Yorker. His work has been featured in the Boston Globe, Time, and Harvard Business Review.