Fatal Pursuit: A Mystery of the French Countryside (Bruno, Chief of Police Series #9) 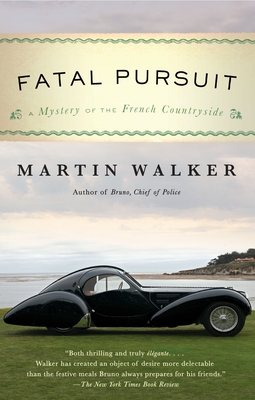 Fatal Pursuit: A Mystery of the French Countryside (Bruno, Chief of Police Series #9)

A pair of murders, a romance, and rivals in pursuit of a long-lost vintage car make for another mystery for Bruno, chief of police.

It’s the start of summer, and Bruno’s found himself the last-minute replacement navigator in a car rally race. The event has attracted a spate of outsiders with deep pockets, big egos and, in the case of one young Englishman, an intriguing story about a lost Bugatti Type 57C. Having disappeared somewhere in France during World War II, and worth millions of dollars, it’s among the most beautiful cars ever made, driving its pursuers mad with greed.
When a local scholar turns up dead, Bruno suspects unnatural causes. Still, while life may offer its challenges—often in the form of distractingly comely Parisiennes—there is always time for a good bottle and a home-cooked meal.

Martin Walker is a senior fellow of the Global Business Policy Council, a private think tank based in Washington, D.C. He is also editor in chief emeritus and international affairs columnist at United Press International. His previous novels in the Bruno series are Bruno, Chief of Police; The Dark Vineyard; Black Diamond; The Crowded Grave; The Devil’s Cave; The Resistance Man; The Children Return; and The Patriarch, all international bestsellers. He lives in Washington, D.C., and the Dordogne.