Let the Circle Be Unbroken 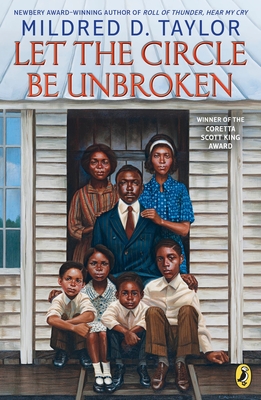 Let the Circle Be Unbroken

By  Mildred D. Taylor
Paperback
$ 8.99
On Our Shelves Now

It is a frightening and turbulent time for the Logan family. First, their friend T.J. must go on trial for murder--and confront an all-white jury. Then, Cousin Suzella tries to pass for white, with humiliating consequences. And when Cassie's neighbor, Mrs. Lee Annie, stands up for her right to vote, she and her family are driven from their home. Other neighbors are destroyed and shattered by the greed of landowners. But through it all, Cassie and the Logans stand together and stand proud--proving that courage, love, and understanding can defy even the deepest prejudice.


"This dramatic sequel to Roll of Thunder, Hear My Cry is a powerful novel . . .capable of touching readers of any age."—The Christian Science Monitor

Mildred D. Taylor is the author of nine novels including The Road to Memphis, Let the Circle Be Unbroken, The Land, The Well, and Roll of Thunder, Hear My Cry. Her books have won numerous awards, among them a Newbery Medal (for Roll of Thunder, Hear My Cry), four Coretta Scott King Awards, and a Boston Globe-Horn Book Award. Her book The Land was awarded the L.A. Times Book Prize and the PEN Award for Children's Literature. In 2003, Ms. Taylor was named the First Laureate of the NSK Neustadt Prize for Children's Literature. Ms. Taylor now devotes her time to her family, writing, and what she terms "the family ranch" in the foothills of the Rocky Mountains.


Kadir Nelson (www.kadirnelson.com) is a two-time Caldecott Honor Award recipient. He has received an NAACP Image Award, a CASEY Award, the 2009 and 2014 Coretta Scott King Author Award, and the 2009 Robert F. Sibert Informational Book Award. Among Mr. Nelson's other awards are gold and silver medals from the Society of Illustrators. His work has appeared in The New York Times, Sports Illustrated, and The New Yorker. He lives in Los Angeles.