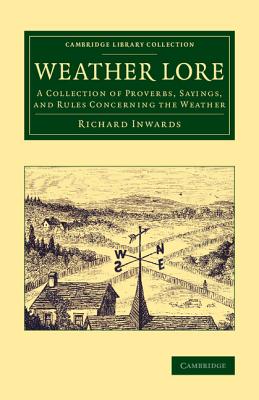 Richard Inwards (1840 1937) trained as a mining engineer, working on projects in Europe and South America (his book on Tiwanaku in Bolivia, The Temple of the Andes, is also reissued in the Cambridge Library Collection). A fellow of the Royal Meteorological Society and the Royal Astronomical Society, Inwards became well known in scientific circles. Weather Lore was first published in 1869, with this 1893 second edition including new entries from the United States. Compiled from sources as diverse as Hesiod, the Bible and Francis Bacon, the collection includes the notable observations that 'if spaniels sleep more than usual, it foretells wet weather', but 'if rats are more restless than usual, rain is at hand'. Often entertaining, always fascinating, the book does not pretend to be scientifically accurate; as the author was to remark later, 'no human being can correctly predict the weather, even for a week to come'.