Everyone Loses: The Ukraine Crisis and the Ruinous Contest for Post-Soviet Eurasia (Adelphi) 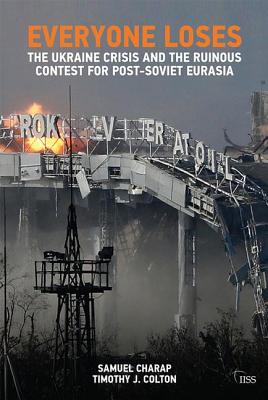 Everyone Loses: The Ukraine Crisis and the Ruinous Contest for Post-Soviet Eurasia (Adelphi)

Disorder erupted in Ukraine in 2014, involving the overthrow of a sitting government, the Russian annexation of the Crimean peninsula, and a violent insurrection, supported by Moscow, in the east of the country.

This Adelphi book argues that the crisis has yielded a ruinous outcome, in which all the parties are worse off and international security has deteriorated. This negative-sum scenario resulted from years of zero-sum behaviour on the part of Russia and the West in post-Soviet Eurasia, which the authors rigorously analyse. The rivalry was manageable in the early period after the Cold War, only to become entrenched and bitter a decade later. The upshot has been systematic losses for Russia, the West and the countries caught in between.

All the governments involved must recognise that long-standing policies aimed at achieving one-sided advantage have reached a dead end, Charap and Colton argue, and commit to finding mutually acceptable alternatives through patient negotiation.

Samuel Charap is Senior Fellow for Russia and Eurasia at the International Institute for Strategic Studies, based in the Institute's Washington, DC office. Prior to joining the Institute, Samuel served as Senior Advisor to the US Undersecretary of State for Arms Control and International Security and on the Secretary of State's Policy Planning Staff. Timothy J. Colton is Morris and Anna Feldberg Professor of Government and Russian Studies, Harvard University. Specialist on Russian and Eurasian politics and government. Author of Yeltsin: A Life (2008), Russia: What Everyone Needs to Know (2016), and other works. Fellow of the American Academy of Arts and Sciences.