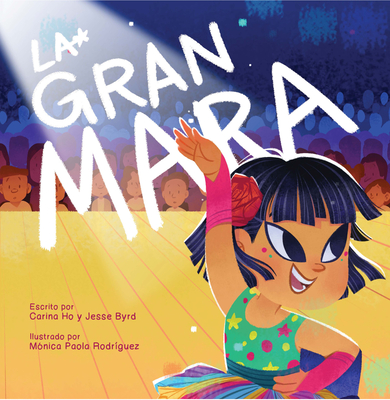 Meet Mara: a vibrant and upbeat little girl living in bland and homogenous Sametown. She aspires to be a dancer (she loves to dance ) and knows she can be successful despite her disability. Amidst her town's growing dissuasion and heckling, she practices and remains positive, culminating in a colorful, strut-your-stuff moment at her school talent show

Carina Ho is dancer and musician who performs under the moniker ONIKHO. Having trained in dance and music since childhood, Carina joined AXIS Dance Company, a physically integrated dance company that casts dancers with and without disabilities, shortly after sustaining a spinal cord injury. Over the next two years she toured the United States with them until she was awarded a Fulbright Fellowship, for which she relocated to Montevideo, Uruguay to teach at the national dance conservatory El SODRE. During this time, Carina also began developing her music project, which melds her influences of classical, blues, and electronic music. Today she primarily tours as a musical artist, often collaborating with other disabled artists to promote the visibility of diverse bodies in the arts. Her work can be found at www.onikhomusic.comJesse Byrd is an international award-winning children's book author and the youngest NPR Board member. At 6'8", Jesse pivoted from playing basketball at UCSB to pursue his passion for storytelling. After working at Google in Silicon Valley and later EY in Dubai as Director of Communications for Middle East and North Africa, Jesse turned all of his energy toward his deepest love: making stories for youth and families with a focus on supporting diverse creators and #own voices material. He's written six children's books and helped produce over 40 others as an editor, art director, and publishing consultant. Jesse is based in Los Angeles, CA.