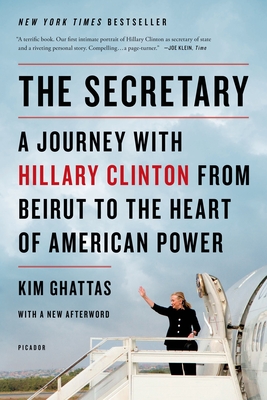 THE FIRST INSIDE ACCOUNT TO BE PUBLISHED ABOUT HILLARY CLINTON'S TIME AS SECRETARY OF STATE, ANCHORED BY GHATTAS'S OWN PERSPECTIVE AND HER QUEST TO UNDERSTAND AMERICA'S PLACE IN THE WORLD.

In November 2008, Hillary Clinton agreed to work for her former rival. As President Barack Obama's secretary of state, she set out to repair America's image around the world—and her own. For the following four years, BBC foreign correspondent Kim Ghattas had unparalleled access to Clinton and her entourage, and she weaves a fast-paced, gripping account of life on the road with Clinton in The Secretary.

With the perspective of one who is both an insider and an outsider, Ghattas draws on extensive interviews with Clinton, administration officials, and players in Washington as well as overseas, to paint an intimate and candid portrait of one of the most powerful global politicians. Filled with fresh insights, The Secretary provides a captivating analysis of Clinton's brand of diplomacy and the Obama administration's efforts to redefine American power in the twenty-first century.

Populated with a cast of real-life characters, The Secretary tells the story of Clinton's transformation from popular but polarizing politician to America's envoy to the world in compelling detail and with all the tension of high stakes diplomacy. From her evolving relationship with President Obama to the drama of WikiLeaks and the turmoil of the Arab Spring, we see Clinton cheerfully boarding her plane at 3 a.m. after no sleep, reading the riot act to the Chinese, and going through her diplomatic checklist before signing on to war in Libya—all the while trying to restore American leadership in a rapidly changing world.

Viewed through Ghattas's vantage point as a half-Dutch, half-Lebanese citizen who grew up in the crossfire of the Lebanese civil war, The Secretary is also the author's own journey as she seeks to answer the questions that haunted her childhood. How powerful is America really? And, if it is in decline, who or what will replace it and what will it mean for America and the world?

Kim Ghattas is an Emmy-award winning journalist and writer who covered the Middle East for twenty years for the BBC and the Financial Times. She has also reported on the U.S State Department and American politics. She has been published in The Atlantic, the Washington Post, and Foreign Policy and is currently a non-resident scholar at the Carnegie Endowment for International Peace in Washington. Her first book, The Secretary, was a New York Times bestseller. Born and raised in Lebanon, she now lives between Beirut and Washington D.C.