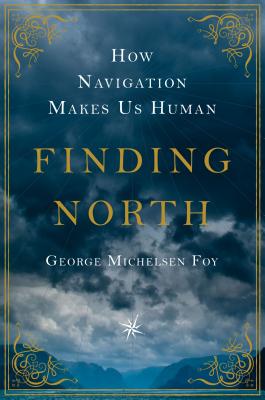 Navigation is the key human skill. It's something we do everywhere, whether feeling our way through a bedroom in the dark, or charting a ship's course. But how does navigation affect our brains, our memory, ourselves? Blending scientific research and memoir, and written in beautiful prose, Finding North starts with a quest by the author to understand this most basic of human skills---and why it's in mortal peril.

In 1844, Foy's great-great grandfather, captain of a Norwegian cargo ship, perished at sea after getting lost in a snowstorm. Foy decides to unravel the mystery surrounding Halvor Michelsen's death---and the roots of his own obsession with navigation---by re-creating his ancestor's trip using only period instruments.

Beforehand, he meets a colorful cast of characters to learn whether men really have better directional skills than women, how cells, eels, and spaceships navigate; and how tragedy results from GPS glitches. He interviews a cabby who has memorized every street in London, sails on a Haitian cargo sloop, and visits the site of a secret navigational cult in Greece.

At the heart of Foy's story is this fact: navigation and the brain's memory centers are inextricably linked. As Foy unravels the secret behind Halvor's death, he also discovers why forsaking our navigation skills in favor of GPS may lead not only to Alzheimers and other diseases of memory, but to losing a key part of what makes us human.

GEORGE MICHELSEN FOY is the author of Zero Decibels: The Quest for Absolute Silence, and twelve critically acclaimed novels. He is the recipient of a National Endowment of the Art fellowship in fiction. His novel Art & Practice of Explosion came second in Foreword magazine's 2001 Novel of the Year contest, andThe Shift was a finalist for the Philip K. Dick prize. His articles, reviews, and stories have been published by Rolling Stone, The Boston Globe, Harper's, The New York Times, and Men's Journal, among others, and has been an investigative reporter, writer, and/or editor for BusinessWeek, The International Herald Tribune, and The Cape Cod Register. He was educated at the Sorbonne, the London School of Economics and Political Science, and Bennington College. He teaches creative writing at New York University. He is married with two children, and divides his time between coastal Massachusetts and New York.