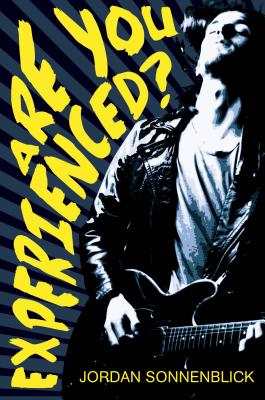 Rich is fifteen and plays guitar. When his girlfriend asks him to perform at protest rally, he jumps at the chance. Unfortunately, the police show up, and so does Rich's dad. He's in big trouble. Again. To make matters worse, this happens near the anniversary of his uncle's death from a drug overdose years ago. Rich's dad always gets depressed this time of year, but whenever Rich asks questions about his late uncle, his dad shuts down.

Frustrated by his dad's silence, Rich sneaks into his office and breaks into a locked cabinet that holds his dad's prized possession: an electric guitar signed by Jimi Hendrix. Before he knows it, Rich is transported to the side of a road in Upstate New York with a beautiful girl bending over him. It will take him a while to realize it's 1969, he's at Woodstock, and the girl's band of friends includes his fifteen-year-old dad and his uncle, who's still alive. In Are You Experienced? by Jordan Sonnenblick, what Rich learns, who he meets, and what he does could change his life forever.

JORDAN SONNENBLICK is the author of Dodger and Me (Book 1) and Dodger for President (Book 2), both available in paperback from Square Fish. He is also the author of several acclaimed teen novels, including Drums, Girls, and Dangerous Pie. He lives with his family in Bethlehem, Pennsylvania.