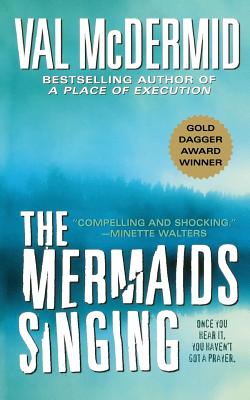 The Mermaids Singing is a chilling and taut psychological mystery from Val McDermid, the basis for the ITV series Wire in the Blood, starring Robson Green and Hermione Norris.

This was the summer he discovered what he wanted--at a gruesome museum of criminology far off the beaten track of more timid tourists. Visions of torture inspired his fantasies like a muse. It would prove so terribly fulfilling.

The bodies of four men have been discovered in the town of Bradfield. Enlisted to investigate is criminal psychologist Tony Hill. Even for a seasoned professional, the series of mutilation sex murders is unlike anything he's encountered before. But profiling the psychopath is not beyond him. Hill's own past has made him the perfect man to comprehend the killer's motives. It's also made him the perfect victim.

A game has begun for the hunter and the hunted. But as Hill confronts his own hidden demons, he must also come face-to-face with an evil so profound he may not have the courage--or the power--to stop it...

Val McDermid was a journalist for sixteen years and is now a full-time writer living in South Manchester. In 1995, she won the Gold Dagger Award for Best Crime Novel of the Year for The Mermaids Singing. Her novel A Place of Execution won a Los Angeles Times Book Prize, was nominated for the Edgar Award for Best Novel, and named a New York Times Notable Book of the Year.