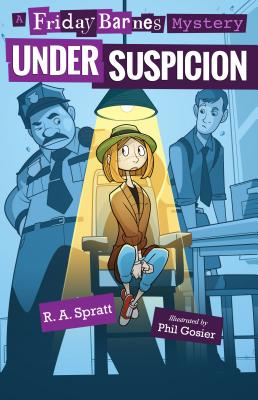 Getting arrested was the last thing Friday expected after solving the swamp-yeti mystery at her boarding school. But she better clear her name fast! She’s got new cases to investigate, like a scandalous quiche bake-off, a decades old mystery buried in her school’s backyard, and why the new boy, Christopher, is being so nice to her.

More adventures and intrigue ensue in Under Suspicion: A Friday Barnes Mystery, the second book in the illustrated Friday Barnes mystery series, starring a genius detective with the brains (and social skills) of Sherlock Holmes.

Praise for Under Suspicion: A Friday Barnes Mystery:

“Spratt continues to hit just the right mix of dry humor and suspense. Her characterization of her protagonist shines . . . Readers know that, like Sherlock Holmes, Friday will solve every mystery; the book’s fun is in seeing how she does it . . . A cliffhanger ending will have readers drumming their fingers as they wait for the next episode.” —Kirkus Reviews

“[For] readers who like humor but also want more intelligent characters and jokes, as well as those who like quirky mysteries.” —Booklist

“This second book in the Friday Barnes series is even funnier and quirkier than its predecessor.” —School Library Journal

R.A. Spratt is an award-winning author and television writer. Her Nanny Piggins series went into nine best selling volumes in Australia. She lives in Bowral, Australia with her husband, two daughters and a puppy called Henry. Like Friday Barnes, R.A. enjoys wearing a silly hat.

Phil Gosier is an independent art director and designer working in the Washington, D.C. area. His illustration and design clients include Kellogg's, the Discovery Channel, Marvel and DC Comics, and Macmillan, where he illustrates the Friday Barnes Mystery series as well as his own picture books, including Snow Beast Comes to Play. He graduated from the University of Maryland and lives in suburban Maryland with his family.